Future of NBFC in India

Non-banking Financial Companies in the Indian economy is on the rise as they target those left traditionally out by the banks.These companies are tech-driven and may achieve 19% of credit market by 2020.NBFC is hence the critically important component of the financial system of our economy. 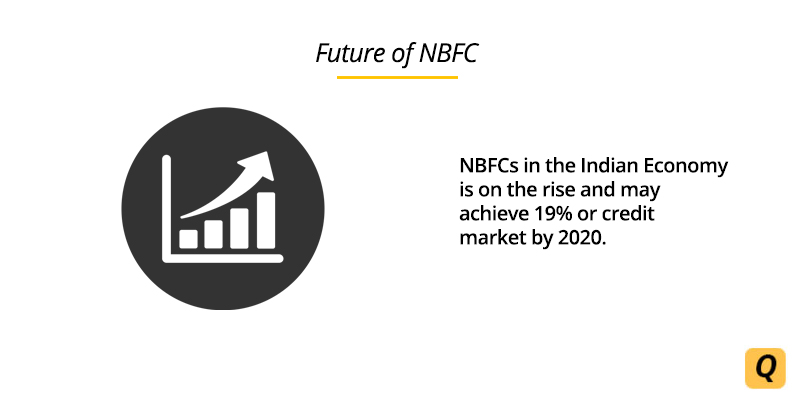 For a country like India which is diverse and vast, the financial sector is the fuel of the economy, and NBFC’s are crucial links of the economy delivering a different set of services such as lending, Investment banking, and capital market operations. Non-banking financial Company is a company registered under the companies act 2013 1st 1956. These type of company mostly engaged in the business of lending, chit business, insurance business, and acquisition of stocks, debentures, and securities.

Non-Banking companies have expansive reach as compared to the banking system of our economy; this why NBFC’s in Indian financial sector provide credit facility for small needs of the unbanked and rural sector of the economy. Many government-backed schemes have made it possible for most of the Indian population to have their own bank account, but the still certain population of India do not use banking facility. To increase this number, the government has asked 21 other companies to establish a special system to further and strengthen the financial sector of the economy.

Future Expansion Of NBFC in India

Indian banking sector has been facing a lot of trouble over the past few years due to the burden of Non-Paying accounts. This scenario has opened up a new perspective for the Non-Banking Financial Companies (NBFCs). NBFC have a greater important role now as the banking system has constricted themselves and are not expanding their lending activities.

The government has a strong focus on promoting entrepreneurship, and therefore they can help the NBFC sector in the Indian economy to realize their full potential and attain greater efficiency while performing the duties.

NBFC have emerged a cut above other financial institution as the largest receiver of funds; this is supported by the financial stability report, and 2015. The increasing growth in the NBFC’s has forced RBI to introduce additional safeguards to contain the systemic risks. Unlike the other players in the banking and financial segment, NBFCs grew by 15.5 percent in Financial Year (FY) 2016-17 as against 9.1 percent growth in Financial Year  2015-16.

The growth of NBFC faced many problems seeing that they were considered a systemic risk to the financial sector of the Indian economy. NBFC now have a large presence in the retail lending sector the estimated account for automobile loan is 44%and 52%for a loan provided against the private sector

NBFC in India have a ground-level understanding of their customers and their credit scores this provides them with an edge over their counterparts in the banking system. A new measure for liquidity aggregate has been appropriated for NBFC, i.e. now net credit account of NBFC should be 20 crores or more for it to be registered by RBI as an NBFC company.

The growth of NBFC in the current economy amounts up to 16%, and this is twice the bank credit growth in the same period.

The distribution reach of many Non-Banking Financial companies is wide-ranging and unmatched by the banks which are there in that area.

NBFC are using digital surrogate data in the absence of income proof documents to improve credit penetration in India. The share growth of NBFC in the Indian economy has gone up from 10%to 15% between 2005 and 2015.

The growth of credit share is seen in all types of NBFC companies and not only traditional NBFC like commercial vehicle finance companies The new regulations which are laid down by RBI and companies act 2013 have paved the way for NBFC growth in Indian economy.

The contribution of NBFC to Indian Economy

More on: Difference between an NBFC and Bank

The growth of NBFC in the Indian economy is lower than many other developing countries like Thailand and Malaysia where NBFC’S credit penetration is 25%whereas in Indian economy NBFC’s company’s credit penetration is only 15% only. NBFC have gained momentum in the Indian economy recently where there has been a significant increase in incorporation of companies since the 1990’s. Government Initiatives like Pradhan Mantri Jan Dhan Yojna has introduced banking system to that part of India which was not aware of it but still 15% of the adults don’t use the banking facilities which are available to them and therefore government has introduced 21 NBFC to curb this difference as NBFC's have far-reaching effect than what commercial banks have.

NBFC are specialized players, and they are the companies which will entirely change the banking value chain, this will ensure the sustainable growth of the economy for the long run.

With the introduction of small finance banks and proposed bill payment service providers would anatomize traditional banking in the country and this will open up opportunities for NBFCs to provide financial offerings for its clients.