Bharatmatrimony has been granted plea to stop Shadi.com for using its trademark and website URL. The Madras High Court has granted an injunction in the matter against Shadi.com. 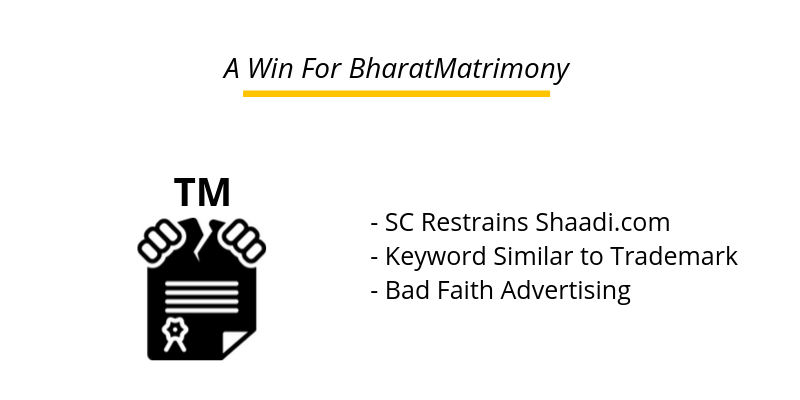 The famous online Matrimony website BharatMatrimony initiated trademark infringement suit against various matrimony services and also Shadi.com. As per the company’s plaint, it was stated that other matrimony services were hoping for a free ride on the trust and goodwill of Bharatmatrimony.

The trademark infringement suit was initiated to prevent encroachment upon Well-Known trademark BengaliMatrimony, MarathiMatrimony and PunjabiMatrimony. The injunction was granted by Madras High Court on 31st July 2019.

The parent company (Matrimony.com) in the past has also been involved in other trademark infringement cases against KalayanMatrimony, which is associated with Kalayaan Jewelers.

The company is ready to take any possible legal action against the infringers that are using the trademark through bidding online for the use of Google ad-Words.

The GM Legal&Regulatory S Ravichandran, in his statement to Financial express, stated

“Over the past 20 years, we have invested heavily in promoting and marketing these trademarked services. We will continue to take stringent legal action against violators who deceptively use our trademarks online and offline”

The case involved infringement upon the registered trademark of the matrimony brand BharatMatrimony, the online matrimony service provider was infringing upon TamilMatrimony, TelguMatrimony, KerelaMatrimony through various Search Engine Optimization Practices. The High court granted the company with interim Injunction against the use of such marks even for SEO.

The win against Shadi.com come as no surprise as the company has been promoting and participating in various marketing campaigns for the past 20 years.

The listed matchmaking company representative in his statement said that they are ever ready to initiate legal action against violators that infringe upon their registered trademark.

Besides the 2 major companies (shadi.com and KalayanMatrimony), the company has obtained infringement against 10 other small matrimony websites.