Concurrent Use and Co-existing Registration

There exists confusion between concurrent use and a co-existing registration. This article gives a thorough overview of the terms ‘Concurrent Use’ and ‘Co-existing User’ and will help you understand the terms better. 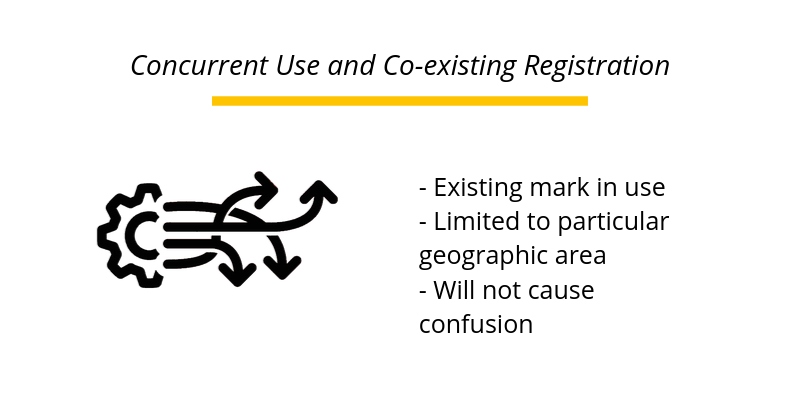 The Trademark Act, 1999 provides for registration of identical or similar marks by concurrent users under Section 12 of the Act. The word ‘honest’ is used along with concurrent. So, if someone wants to register a mark which is identical or similar to another mark which is also being used with respect to similar goods, he can do so provided certain conditions are met.

This can be explained using the case of Goenka Institute of Education and Research v. Anjani Kumar Goenka. The Division Bench of the Delhi High Court delivered the judgment in 2009. In the facts of the case, the Delhi-based G.D. Goenka Public School sued Rajasthan based Goenka Institute of Education and Research. The plaintiffs claimed exclusive ownership/right to use the word “Goenka”.

The court found that

But even when concurrent use is allowed under S. 12, the registrar has the power to issue such direction as may be necessary in order to avoid there being any confusion with respect to use of the marks.

For example, the registrar may put such conditions as territorial limitations, displaying disclaimer along with the mark, etc. Under S. 28(3) of the Trademark Act, such concurrent users, all of whose marks are registered, shall not have any rights against each other but all of them shall have rights against any third party, as if they were the exclusive owners of the mark.

One such case is, as discussed above, of concurrent use. Another instance where a mark may be registered although an identical or similar mark is already registered can be if the opposing mark is weak.

An ‘Opposing mark’ refers to the mark belonging to the person opposing the registration of another’s mark. A

The court held that Shree Ram is the name of a popular Hindi deity and no one proprietor can claim exclusive ownership or right over the mark “Shree Ram” therefore both the parties could use it.

Therefore, a number of people may have registered their marks containing such descriptive words, or words which are common to a particular trade, but such marks will be considered weak unless it can be proved the mark itself is distinct or has acquired distinctiveness over a period of time due to its market presence.

However, the most common practice, when the two parties are aware of the presence of each other’s similar trademark is that of signing a co-existence agreement stating the geographical or other limitations on the usage of each mark. In return, they agree to not oppose each other’s mark.

Example of Co-Existence Between Brands

One of the most famous co-existence agreement was signed between Apple Computers and Apple Corps (record label founded by The Beatles).

So this is another way how two similar marks can co-exist. But even such agreements are not the rule of law at the end of the day and the registrar may still refuse to register a mark in spite of their being a co-existence agreement in place if he thinks that the two marks will cause confusion to the public.

The basic catch for two similar marks to co-exist is the word ‘peaceful’ which has almost always been used by courts when talking about co-existence of marks.

If the two marks can peacefully co-exist, without overlapping or interfering with each other or causing confusion to public as to the origin of the goods or services then the marks although identical or similar may co-exist.