Mandatory KYC for Directors of all Companies

The Ministry of Corporate Affairs directs new rules for the directors of all companies. The new rules require directors of all private, public companies and LLPs (designated partners) to comply with the Directors KYC norms to avoid deactivation of their DIN (Director Identification Number). 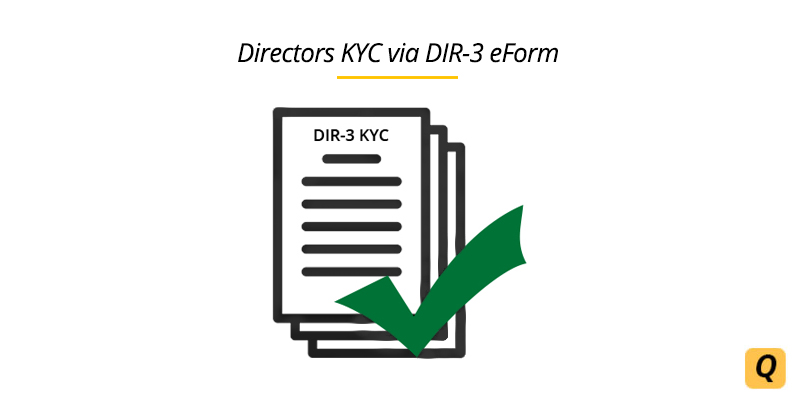 In a move to increase transparency and reduce malpractice in the corporate sector, the Ministry of Corporate Affairs (MCA) has introduced mandatory Directors KYC norms that Directors of all Companies must comply. The Companies Rules, 2014, in relation to Appointment and Qualification of Directors, was amended to this effect, and came into force on July 10, 2018. Let’s look at the pressure points of this new mandate.

Rule 12A of The Companies Rules now specifies that a Directors KYC has been made mandatory. The format for eForm DIR-3 KYC (Directors KYC) has been notified, and must be filed every year. The form would have to be submitted with required supporting documents and must be certified by a practising Chartered Accountant or Company Secretary.

All company directors must comply with the rules, irrespective of whether they hold office or not (including foreign directors of Indian companies). Designated partners of LLPs are also included in the scope of the compliance. Therefore, all partners holding a Designated Partners Identification Number (DPIN) would have to file the DIR-3 form. The rules also extend to disqualified directors. However, disqualified directors would have to have their DIN updated, and submit the Directors KYC along with an addendum.

The government has made it clear that the Directors KYC compliance would be a yearly exercise. All directors (and designated partners) would need to submit their KYC documents annually.

Cut-off dates: The cut-off date to fall under the compliance bracket would be March 31. Meaning, if a person has a DIN as on March 31, he or she would mandatorily have to file the DIR-3 KYC for that financial year.

Date of Submission of the KYC form: This is a recurring compliance requirement to be filed annually. For a particular financial year, the DIR-3 KYC has to be filed by April 30 of the next financial year. So, for all DINs allotted in the financial year 2018-19, the last date to submit the form would be April 30, 2019.

The MCA has not specified any filing fees for the DIR-3 KYC. However, delay in filing the Directors KYC form (after the specified due date) would attract a penalty of INR 5,000 per form. Furthur, the Government would deactivate the DIN upon failure to comply.

Supporting Details(KYC Documents) with the DIR-3

The Ministry has pushed for these norms to clean up businesses and stop bogus practices (such as shell companies and the use of fake or non-existent directors) in the corporate sector that has resulted in several money laundering activities. With this exercise, the government wants to ensure that genuine people are sitting on the boards of companies.