India is developing at a great pace, and it's booming economy attracts the NRIs and Foreigners to establish enterprise in India. Another reason is its diverse nature and huge population which gives a large market to the Companies. 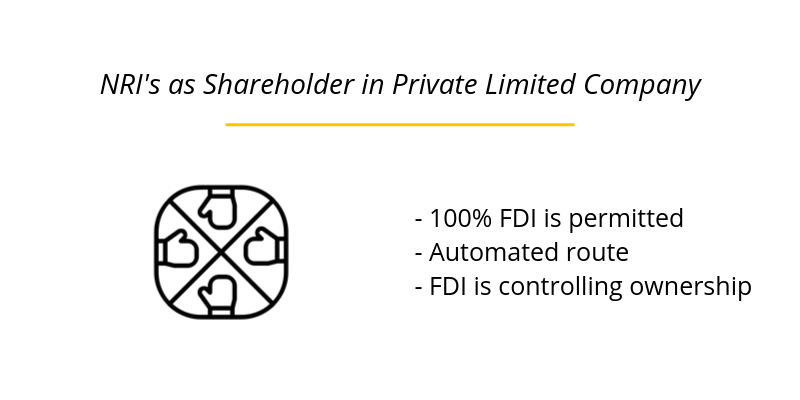 Here, we are talking about NRIs as Shareholder in a private Limited Company, before that lets get a clear concept of NRIs. The general abbreviation of NRI is Non-Resident Indian, but have two classifications;

This classification is done by FEMA Act, 1999. Private Limited Company is a popular mode for the NRI or Foreign Investors to start on with business in India.

Are NRI's allowed to establish any Company type they want in India?

NRI shareholders incorporating in a Private Limited Company in India

It is recommended to choose a Private Limited Company as the business type because it allows FDI(Foreign Direct Investment) into India under the automatic route, and also for a Limited Liability Partnership they need prior approval from the Reserve Bank of India for the same.

The Companies Act, 2013 allows the NRI as the directors and shareholders of the Private Limited Company. There is a need of minimum two shareholders and can have a maximum of 200 shareholders. However certain FDI norms in India are to be subjected to the NRI, the process of shareholding is much simpler as the Reserve Bank of India allows 100% FDI in many sectors in India under the automatic route.

3. The procedure of Incorporation

There is no difference in the process of registration of the Company for the NRIs as compare to the Indian Directors and Shareholders. There is a need of at least one Director and one shareholder of Indian Origin. The documents are same as of the Indian Shareholders, but all must be notarized. The ID-proof, Address Proof and other documents of foreign documents need to be Notarized by a licensed professional.

Purchase & Transfer of Shares by NRIs in a Private Limited Company

There are several conditions on which the purchase of the shares of NRI depends, a person staying out of India can purchase share/equity/stock/preference shares/convertible debentures that are offered by an Indian Company based on the following conditions:

Transfer of shares depends on who is transferring the share to whom. It can be the following situations

The transfer of share by NRI to an Indian Resident is permissible by the Reserve Bank of India, and can be done by way of gift to a resident of India.

2. NRI to Person Resident in India

3. NRI to another NRI

The Reserve Bank of India has given permission to carry forward this transfer of shares of a Company from one NRI to another NRI/PIO.