Personified Features of One Person Company 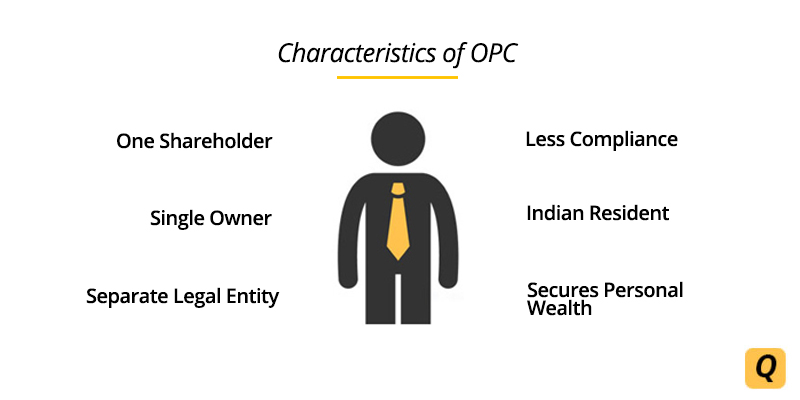 The Startup India Scheme has made a steep rise in demand for registrations of new companies in India. The most popular business structures for Startup model business entities are Private Limited Companies and Limited Liability Partnerships. The Companies Act, 2013 has introduced One Person Company (OPC) model by providing an opportunity to enter into a corporate world with a single person as member and having the privileges of a private company. In the recent years, One Person Company type organization has also received extensive popularity among Startup formation entity structures. In this article the discussion goes further deep into the peculiar features of a One Person Company.

An OPC is considered as a fusion of Sole Proprietorship and Private Limited Company. Similarly in the formation of Sole Proprietorship, the OPC requires only one Director to form such company. At the same time OPC enjoys all the benefits of a private limited company such as separate legal entity, limited liability and perpetual succession.  While enjoying the benefits of the single owner, the OPC will not make its promoter liable for the unpaid liabilities of the company. As per the Act, in a one person company the liability of the single shareholder would be limited to the unpaid subscription money in his name.

The provisions of the Act also made it available for an OPC to continue its business, in the event of inability or death of the owner of the company, by taking over its business by its legal nominee. The legal status and automatic succession has increased the popularity of One Person Company among banking and financial institutions to lend money.

Though OPC has the benefits of a private limited company, it is still flexible in some stringent clauses of a private limited company structure. For instance, a minimum of two directors and shareholders are required to form a private limited company, whereas a One Person Company requires only a single director for its formation. Moreover, while comparing with Private Limited Company, One Person Company have to face little compliance burden. An OPC requires minimum compliance as holding annual general meeting is not mandatory and relaxation is available in filing and signing of financial statements. Also, it is not mandatory to appoint a Company Secretary in OPC and hence the annual return of OPC companies can be signed by Director.

As per the Act, it is made mandatory that the word “One Person Company” should be mentioned in brackets below the name of such company wherever it is used.

In India, the One Person Company entities are not available for Foreign Investors. As per the Act, only a resident citizen Indian can form a one person company. The Act clearly defines that a resident citizen is an Indian citizen who has stayed in India for a period of not less than 182 days during the immediately preceding one calendar year and such person is only be eligible to incorporate a One Person Company and can be a nominee. It is also worth to note here that any legal entities like companies or societies or other corporate entities cannot form a one person company. In addition, only a Resident Indian Citizen can be a nominee of an OPC. At the same time, the Act also extended to limit an Individual to form only one OPC and can be nominee of one OPC. In the event of membership on more than one OPC, the nominee has to withdraw his membership from either of the OPCs within one hundred and eighty days. Moreover, a minor cannot become member or nominee of the One Person Company or can hold share with beneficial interest. According to the provisions of the Act, FDI is not allowed for One Person Company, if it does then it will lose its One Person Company status.

Moreover, restrictions are also made on business activity of the OPC. As per the Act, the OPC is not able to carry business of Non Banking Financial Investment activity including investment in security of anybody corporate. Any company formed for such business activity will not come under One Person Company structure.

The provisions of the Act made it liberal for an existing private company other than a not for profit company, can be converted in to One Person Company by passing a special resolution in the general meeting and with the consent of its members and creditors. However, the conversion is possible only if the private company’s paid up share capital is less than or Rs.50 lakhs and the average annual turnover during the relevant period should not exceed Rs.2 crores. Also, a One Person Company would lose its status, If the company’s turnover has crossed Rs.2 crores. Moreover, it is pertinent to note here that a a public limited company cannot be converted to an OPC.

Taking into the consideration of the Tax element, no general advantages are available for an OPC. Being OPC is treated as a private limited company, the same tax slab is applicable and should have to pay 30% tax on profits, and Dividend Distribution Tax and Minimum Alternate Tax are also applicable. However, some industry-specific tax advantages are available for One Person Company and an individual tax exemption is not applicable.