Who cannot apply for a Patent?

Section 6 of the Indian Patents Act states who can apply for a patent. Which inter alia include the true and the first inventor of the invention and an assignee of such person. This article briefly describes persons not entitled to a patent under the Act. 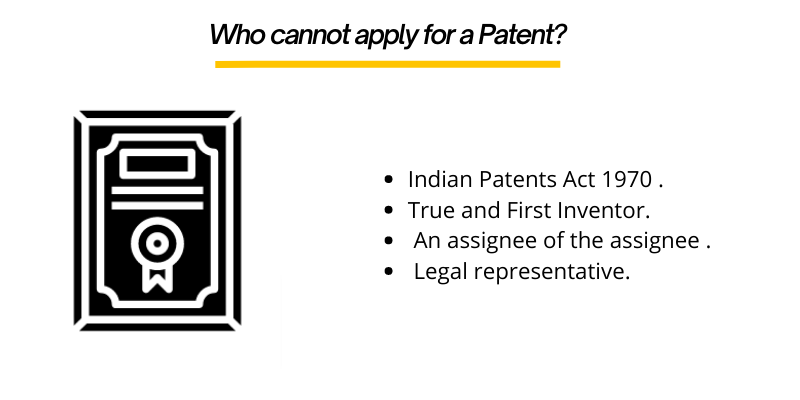 Who is not eligible to apply for a patent?

Section 6 of the Act states that only the following persons may make an application for a patent, either jointly or alone:

Therefore, any person who is not a true or first inventor or assignee or legal representative/ heir of such person cannot apply for a patent as Section 6 of the Act.

Who is a true and first inventor under the Act?

The Act under Section 2(1)(y) defines ‘true and first inventor’ as one who “does not include either the first importer of an invention into India or a person to whom an invention is first communicated outside India.” However, the Act fails to define the word "inventor," and the methodology of defining such ‘inventorship’ is left for subjective interpretation.

However, in V.B. Mohammad Ibrahim vs. Alfred Schafrank (AIR 1960 Mys 173 at 175), it was held that “a person, such as a financial partner, who has not contributed any skill or technical knowledge towards the invention cannot be said to have any capacity to invent, and hence cannot be said to be the inventor.”

Based on Indian Jurisprudence, the following persons cannot be named inventors for the provisions of Section 6:

Who is the assignee under the Act?

Shining Industries vs. Sri. Krishna Industries (AIR 1975 All 231 at 234), it was held that “in the case of a person such as financial partner or employer or firm, an investor or an employee of a firm may assign the rights to the firm for making an application for patent and in such case, the firm can apply for a patent only as an assignee.”

However, a person applying as an assignee must furnish proof of right to make the application while applying or within 6 months of filing as per section 7(2) of the Act.