150000 villages in India to have internet connectivity: Is it finally time for Rural Startups?

India aims to convert its latent population into combatants of GDP by tossing them over the internet. In the Annual Budget, Arun Jaitley, the finance minister of India, propagated to extend high-speed internet connectivity to 1,50,000 villages across the nation. 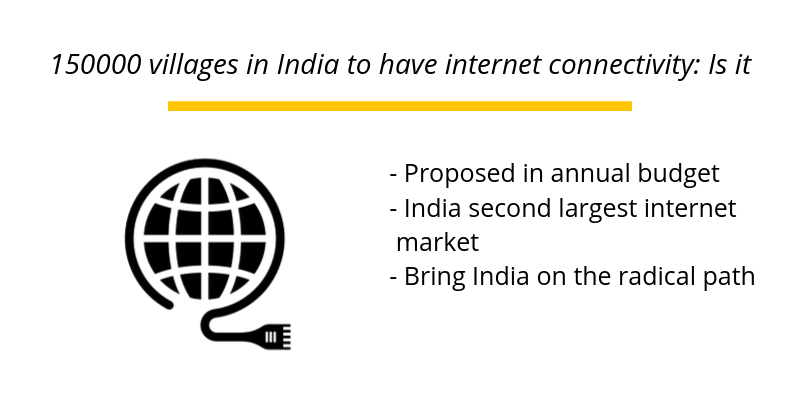 India being second in row after China in population has laid a master plan to break new ground for radical growth by using these ever growing figures of population hike, judiciously. India aims to convert its latent population into combatants of GDP by tossing them over the internet. In the Annual Budget, Arun Jaitley, the finance minister of India,  propagated to extend high-speed internet connectivity to 1,50,000 villages across the nation.

However, with around 450 million people, India is already the second largest internet market in the world. India already has 1,55,000 km long optical fibre cable and will further invest $1.4 Billion in a play to win approach to seek a different radical path for development.

After, India outstripped the U.S. last year for having the most “Facebook” users in the world. India now looks forward to tap into its unconnected population of more than 1.3 Billion spread evenly throughout the nation. The Government, having taken a cue from the Silicon Valley giants, plans to provide free Wi-Fi to rural villages across the nation.

Out of the total population, around 864,676,587 Indians are facing the Digital Divide.

Is Internet just a hype?

The Internet, not only empowers the techno geeks to emerge as Silicon Valley giants; rather it has the potential to modify the entrepreneurial psyche of the individuals. It has lead to the creation of a new parallel economy i.e., Sharing Economy.

Also, it acts as a proactive catalyst for Economic Growth. When the entire nation hits the Internet, it gives them new avenues to explore new capabilities for profitable growth. When the nation’s farmers access the unapproachable world, from an internet-equipped smartphone to anticipate the fair prices for their toil. Or when the government goes live in providing the basic documentary services to remote stratas of the country. You rightly get to know internet’s contribution in restricting the growth patterns. It is essential to know that out of 3,424,971,237 worldwide internet users 462,124,989 are in India. Out of the total population, around 864,676,587 Indians are facing the Digital Divide.

Internet contributed more than 10% of the total GDP growth in India. It increased the real per capita GDP. The effect of iGDP can be measured through:

India captures about 13.5% share of the world’s internet. The Government has taken a front foot in digitalizing the nation under its Make In India campaign. The government has taken certain initiatives and few are in pipeline to help bridge the gap by Internet Leapfrogging.

The Visionary roadmap incorporates the following:

Digital India: Government will make attempts to provide Free Wi-Fi hotspots as a basic fundamental right to the citizens of the nation. It will connect all loose rural ends to transform key 25 sectors.

Digi Gaon: The Government will offer facilities across an online portal to educate and retrofitting into Smart Cities.

Startup India: The aim is to encourage a new craze of start-ups by providing a user-friendly platform.

These sectors were previously characterized with pitfalls. Internet helped to overcome service delivery challenges, lack of content, mass outreach and the fill market gaps. The availability of Internet will lead to exciting innovations in these sectors.

Stumbles in the journey:

In spite of having a huge scope, it is still in a nascent stage.

Lack of Education: Imparting education is still a taboo in the remote areas. Villagers give more importance to skill development. Sadly, the lack of literacy acts as a major pitfall in excelling entrepreneurial skills.

A catalyst is required to open good roads for good connectivity with wholesale markets. A better negotiation not only acts as an intensive to excel but gives a path to expand the scope.

Poverty: The rural population face tough time in making the ends meet. Their low incomes are not even sufficient to fulfil their daily needs.

Internet might provide them with an additional source of income. Moreover, it also gives them new opportunities for start-ups. Rural connectivity is a small step that can culminate a giant leap in solving roadblocks in the economy or call it the advent of a new start-up era.