India: Bait for IT giants

The foundation created by Modi lead campaigns has given new dimensions to IT sector. 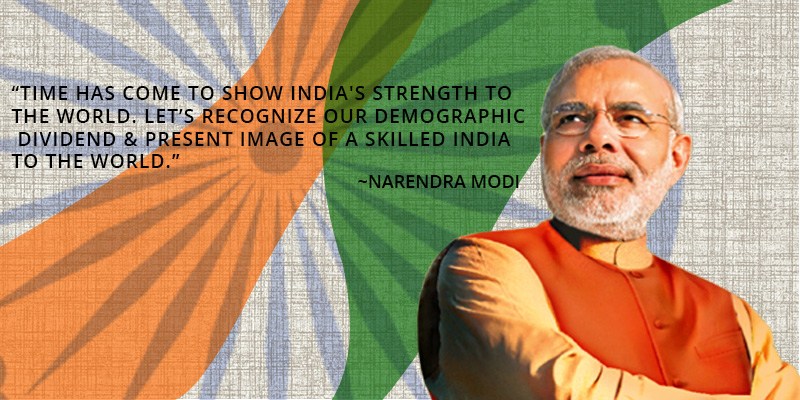 Under the momentous leadership of PM Narendra Modi, India’s flagship program is frenetically topping the charts by making India, the first preference for IT Giants globally. Indian IT sector, aided with 10 million skilled workforce, digital awareness, sound infrastructure and an entrepreneur-oriented climate has lured the top notch tech organisation to appreciate the great potential encompassed in this richly diverse nation.

IT sector has gone through a scalable progress over the last decade to enhance India’s GDP. It has steadily accelerated its contribution from 1.2 % in 1998 to 9.5% in 2015. The foundation created by Modi lead campaigns has given new dimensions to this sector, from grassroots to a global stage. It is expected to touch 14% for 2017 and finally triplicate its current annual revenue by 2025 amounting to $ 350 billion valuation.

Evolution Since Inception:
India has had a long journey introspecting its real potential in unifying this land of diversities. The maturing levels of saturation in the manufacturing sector, blurred the vision of India to emerge as a challenger. However, with the dawn of the internet, a new challenge to explore the IT sector with latent potential emerged, to set the lions to roar. And the rest, is surely a history!

India’s IT sector encompasses a wide scope from; IT oriented services to Business Process Management to other ancillary software or hardware technical products and services.

India’s Current Compounded Annual Growth Rate in IT sector is 13.5%

IT sector’s core competencies and strengths have already given India a viable standing. In the current scenario, 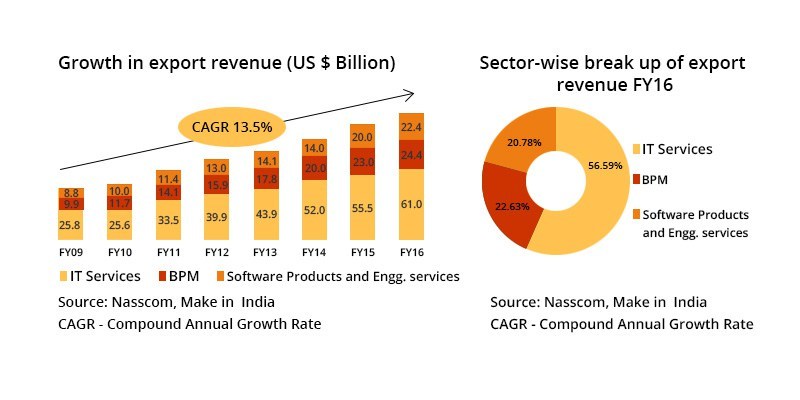 Government’s Initiative:
Narendra Modi’s orator-ship has tapped the latent potential in the IT sector to fuel up the overall growth of the nation. The planned launch of systematic series of campaign like Digital India, Skill India, Make in India, Startup India and the Smart Cities Project startled the world.

The government has laid a serene roadmap to set the baits right for the IT sector.

Moreover, Modi’s Travel Diary not just propagates strengthening of international relationships rather considerate initiatives were taken to meet IT giants to boost their trust to invest and expand in India.

On his journey, Modi personally met the CEO’s of various Tech unicorns including Facebook, Microsoft, CISCO, Intel, Oracle Corporation, Samsung Electronics Co. Ltd., Apple Inc., IBM, Google and many more. Enthused by such efforts, many optimistically committed to invest and expand their operations and scope in India’s niche.

India has come a long way, fighting all odds from knowing the need of having a silicon valley to creating one. Modi-ship streamlined various loose ends be it infrastructure or economic and social barriers.

IT sector is immortal, with real-time unexplored realms. This sector will make India shine on a global front. India has certain USP’s which gives an edge over other nations in providing both on–shore and off-shore technical assistance, which are

Moreover, India’s Internet economy is expected to shoot up to Rs 10 trillion by 2018. The Indian e-commerce is currently valued at $12 billion and is characterised with perpetual growth prospects for IT giants to capture new avenues.

No matter what, our lions are all set to leap; irrespective of the dynamics of the Silicon Valley, our combatants will never taste the grass. That’s how Incredible India is!