What is Patent Claim? 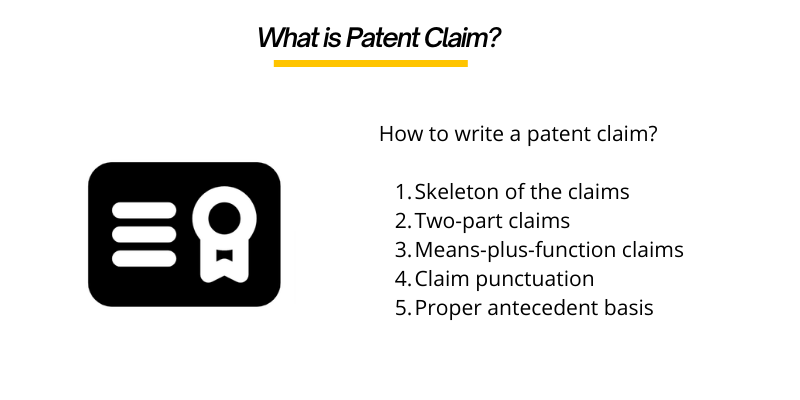 What is a claim in a patent?

Patent claims are the most important part of any patent application that defines the invention and protects the scope of the patent by creating invisible boundaries surrounding the precious invention. It is a salient sector that needs to be drafted very carefully to protect the invention from infringers. It is always recommended to consult a patent attorney for drafting the claims. Because of its importance in claiming exclusivity, it could be highly risky to write the claims on your own that could either be too broad or narrow in scope.

What are the types of Patent Claims?

Under the Indian patent law, claims have been ordered based on drafting, innovativeness, and construction.

3. Based on the field

4. Based on the structure

How to write a patent claim?

Construction of the claims includes a skeleton and a few formats for drafting patent application claims. A few patent formats are explained below:

1. Skeleton of the claims:

The skeleton or structure of any patent includes three main parts: the preamble, the transitional phrase, and the body of the claims.

The very first line of the claims starts with the preamble, which is also in accordance with the title of the invention. It is also known as an independent claim that mostly recites an invention's subject matter. It usually categorizes the invention by its identity as a device or apparatus, process, or composition.

b) The transitional phrase

It is a connecting phrase that broadens the scope of the claims for all the elements that may or may not be used in the patent and assists in considering the boundaries of the claims. These connecting or transitional phrases that include 'comprising', ' including', ' containing', and 'characterized by' are also known as open-ended phrases that help in broadening the scope.

c) Body of the claim

Also known as improvement claims or Jepson claims are the claims which usually contain prior art in the preamble and the invention in the body of the claims. It is basically used for the designation of the subject matter in the claims. For example:-

A vegetable holder steamer, wherein the improvement comprises an automated temperature regulator attached to the steamer.

Patent agents engage themselves more in drafting claims as it is the most important section of the patent. However, despite well-drafted claims, no patent office will ever grant a patent application anywhere in the world if the claims are not properly punctuated. These punctuation rules for the claims are as follows:

The subject matter introduced in the claims must have a proper antecedent basis throughout the claims structure. This includes 'a', 'an', and 'the' articles that must be used before the elements of the claims.

In some cases, reference numerals are used when drawing represents a subject matter and is needed to deliver the claims. For example, considering a drawing containing a device diagram and one of its units are labeled as "132" in the diagram. Thereafter, in the claims, if the same unit is needed to be declared, then the same unit or element will be followed by the referral number in parentheses.

How vital are patent claims?