GST stands for Goods and Service tax in India and was introduced on 1st July 2017 under the Central Goods and Service Tax Act, 2017, to simplify India’s tax structure. Every taxpayer (such as dealer/ supplier of goods and/or any business entities) registered under the GST Act is assigned a GST number known as GSTIN. This article, in brief, discusses the structure of GSTIN and the benefits of registration under the GST Act. 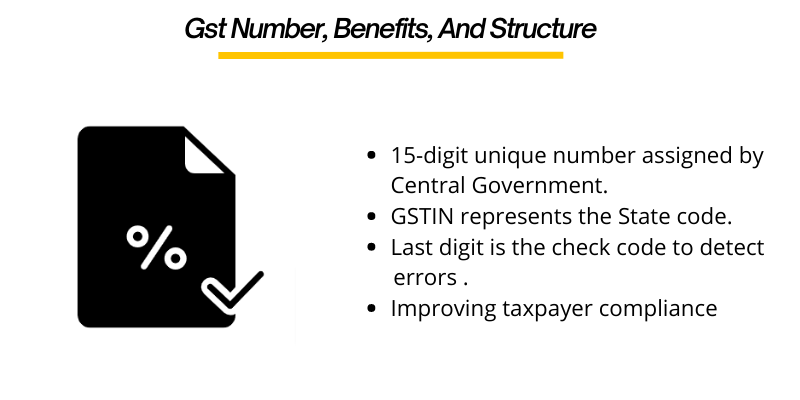 The Central Government vide the Central Goods and Service Tax Act, 2017 (“Act”) introduced the Goods and Services Tax (“GST”), which as per the Act is levied on the supply of goods or services or both, in India. GST subsumed several existing indirect taxes such as Central Excise duty, Service Tax, VAT, Purchase Tax, Central Sales Tax, Entry Tax, Local Body Taxes, Octroi, Luxury Tax, etc., that were being levied by the Centre and State Governments in India.

What is GST Number?
GST Number, commonly referred to as GSTIN, is a 15-digit unique number assigned by the Central Government under the Act to persons primarily dealing in the supply of goods and/or services in India and includes persons registered under the erstwhile acts such as VAT, Sales Tax, etc. GSTIN is assigned basis of the State and PAN of the applicant.

Structure of GST Number
The 15-digit State and PAN-based GSTIN indicates the following:

The introduction of the GST regime in India, has inter alia, the following benefits:

1.GST has brought under its umbrella various existing taxes, thereby simplifying the tax structure in India;

2.Several persons are exempt from paying GST, such as a person supplying goods having a turnover less than Rs. 10,00,000 in the North Eastern States, which help reduce operational compliances and liabilities for small businesses;

3.GST introduces composite schemes which will help persons having turnover more than Rs. 50,00,000 to simply their tax structure by availing such schemes under the Act and paying only 1% of their turnover as tax;

4.GST has brought uniformity in the Indian tax system by allowing centralized registration, which in turn helps small businesses to file their tax returns on time through a simple online mechanism without any hassle;

5.Under the GST regime, exports will be zero-rated, unlike the earlier system;

6.GST has introduced input credit which helps an entity having GSTIN to take input credit for its purchases of goods and services;

7. GST is expected to increase the Government revenue by widening the tax base and improving taxpayer compliance; and

8. It provides legal recognition to persons registered on a centralized level, thereby allowing them to undertake country-wide business.

Overall, GST aims to benefit all the stakeholders, namely industry, government, and the citizens.