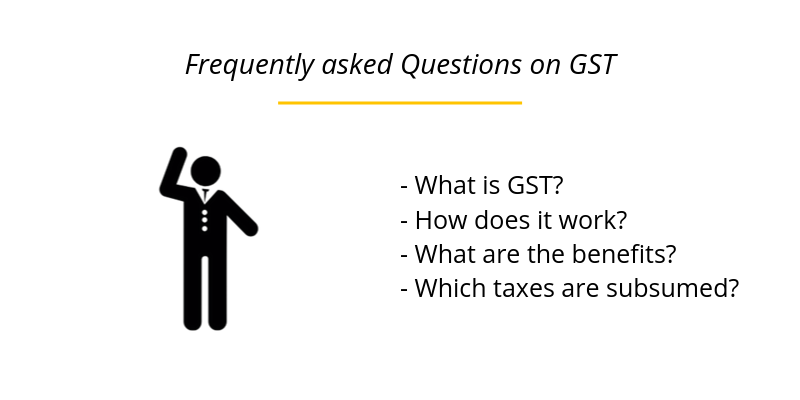 What is GST? How does it work?

GST is a form of tax system that will regularize taxes across the country by introducing one uniform tax regime in India for a unified common market. One single tax will be applicable on the supply of goods and services starting right from the manufacturer to the end consumer. Credits of input taxes paid at each stage will be available in the subsequent stage of value addition, making the GST a tax only on value addition at each stage. Meaning, the consumer will bear only the GS that has been charged by the last dealer in the supply chain with set-off benefits at all the previous stages.​

What are the benefits of GST?

The benefits of GST can be summarized as under:

For Business and Industry

For Central and State Governments

Which taxes at the Centre and State level are being subsumed into GST?

The following taxes are being subsumed at the Central level:

The following taxes are being subsumed at the State level:

What are the major chronological events that have led to the introduction of GST?

GST has been introduced after almost 13 years since it was initially discussed in the Kelkar Task report on indirect taxes. Below is a chronological representation of the major milestones on the proposal to introduce GST in India:

How would GST be administered in India?

There will essentially be two components of GST taking into account the federal structure of the country—Central GST (CGST) and State GST (SGST). The Centre and the States will both levy GST across the entire value chain simultaneously and taxes will be levied on every supply of goods and services. Meaning, that the Central Government would collect The Central GST and similarly the State Government would collect the State GST on all transactions within a state. Moreover, the Input tax credit of the CGST would be available for discharging the liabilities of the CGST on the output at each stage and the credit of SGST paid on inputs would be allowed for paying the SGST on output. There is no provision for cross utilization of credit in the new tax regime.

How would a particular transaction of goods and services be taxed simultaneously under Central GST (CGST) and State GST (SGST)?

The Central GST and the State GST would be levied simultaneously on every transaction on the supply of goods and services except for in the case of goods and services that have been exempted from the rule. Moreover, transactions below a certain threshold limit have also been kept outside the purview of the GST. Moreover, both the Central and the State GST would be levied at the same price and value, which is unlike the State VAT that was levied on the value of goods inclusive of Central Excise.

You can get an idea of how the Dual GST model will work within a state from the diagrammatic representation below:

Will cross utilization of credits between goods and services be allowed under GST regime?

How will be Inter-State Transactions of Goods and Services be taxed under GST in terms of IGST method?

The Centre would levy and collect the integrated Goods and Services Tax (IGST) on all supplies of goods and services on an inter-state level under Article 269A (1) of the constitution. The IGST would be roughly equal to CGST plus SGST. The mechanism of the IGST has been designed in a way, so as to ensure that there is seamless flow of input tax credit from one state to another.

The inter-state seller would have to pay the IGST on his sales to the Central Government after adjusting the credits of the IGST, CGST, SGST on his purchases (In that order). The state which is exporting will have to transfer the credit of the SGST used in the payment of the IGST to the centre. Likewise, the dealer who imports will claim the credit of the IGST while discharging his output tax liability in his own state. The centre will transfer the credit of IGST used in payment of SGST to the importing state. GST is a destination based tax and all SGST on the final products will ordinarily accrue to the consuming state.

The diagram below will help you better understand how it works:

How will IT be used for the implementation of GST?

Both the Central and the State Governments have come together to register the Goods and Services Tax Network (GSTN) as a non-profit, non-Government company for the smooth implementation of GST in the country. This network would provide a shared IT infrastructure and services to the Central and State Governments, tax payers and other stakeholders. The primary objective of the GSTN is to provide a standard and uniform interface to all the concerned party, i.e. the taxpayers, and shared infrastructure and services to the Central and State/UT Governments.

A state-of-the-art comprehensive IT infrastructure is being developed by the GSTN which will include the common GST portal and provide frontend services of registration, returns and payments to all the taxpayers. Not only that, it will also offer backend IT modules for certain states that include processing of returns, registrations, audits, assessments, appeals, etc. To make the process as streamlined as possible, all the states, accounting authorities, RBI and banks are already preparing their IT infrastructure for the smooth implementation and administration of the GST.

How will imports be taxed under GST?

The Additional Duty of Excise or the CVD and the Special Additional Duty or SAD which is currently being levied on all imports would absorbed under the GST. As per explanation to clause (1) of article 269A of the constitution, IGST will be levied on all imports coming into India. The states where the imported goods are consumed will now gain their share from this IGST paid on imported goods which is not the case under the current system of taxation.

What are the major features of the Constitution (122nd Amendment) Bill, 2014?

The salient features of the Bill are as follows:

What are the major features of the proposed registration procedures under GST?

The major features of the proposed registration procedures under GST are as follows:

What are the major features of the proposed returns filing procedures under GST?

The major features of the proposed returns filing procedures under GST are as follows:

What are the major features of the proposed payment procedures under GST?

The major features of the proposed payments procedures under GST are as follows:

Click here to know more about GST Registration in India