Benefits of GST Registration in India

Getting GST registration is mandatory tax compliance, but still, it provides incentives for the consumers, Manufacturers and service providers. The current tax regime makes it possible for small and medium-sized companies to apply for composition schemes as well. 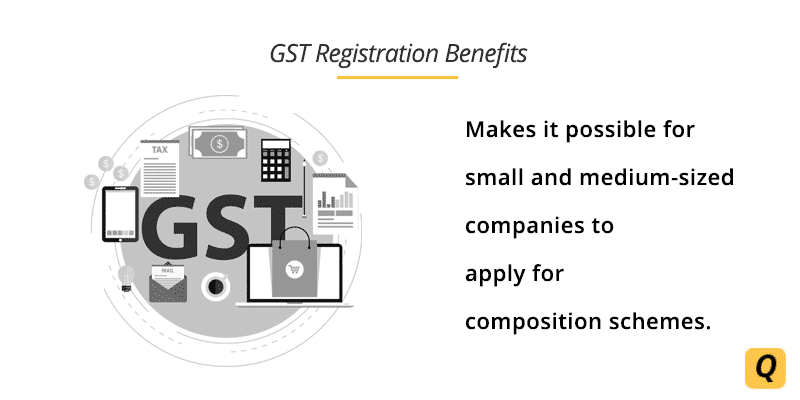 GST is considered to be one of the most significant tax reform in the country which has subsumed many of the indirect taxes imposed by both state and centre. Any tax reform being done at this stage is likely to have its advantages and disadvantages

Ease of Doing Business in India

Before implementation of GST, any new business had to obtain VAT registration from the sales tax department and for businessman operating in more than one state the compliance was difficult as each state had its own rules, fees and compliance structure.

Since the implementation of GST new businesses have to obtain single registration as the process is uniform throughout India.

Exemption limit under the GST regime is higher as compared to the practices followed before. With a uniform turnover limit, i.e. 20 lakh for all businesses in India, the following threshold exempts many businesses which was not possible in the earlier taxation system.

GST covers all goods and services, and the tax is charged only on the value addition rather than on the multitude areas of the product creation. The process reduces the multiplicity of taxes and reduces the burden of the taxes on the taxpayers.

Moreover, VAT, central excise duty and Service Tax subsumed with the implementation of GST which led to cost reduction of various products.

GST provides self-regulation wherein the parties receive notification from the government portal about any mismatch in the details of invoices filed by you (GSTR1) and the recipient of your product(GSTR-2). Both the parties are given ample opportunity to make a correction, and if they fail to comply then, in that case, the amount is transferred back to your output tax liability.

Moreover, such auto-generated activities are needed to keep a check on the fraudulent practices as well.

Uniformity of tax rate throughout India and centralised registration has made compliance easier and faster for the businesses across India. Tax compliance with multiple tax authorities is not necessary anymore as many of the indirect taxes have subsumed which has decreased the tax compliance process.

Under the previous tax regime there were various tax compliances:

NOTE:  Under GST you need manually file single tax, and the rest are automatically updated.

The introduction of tax neutrality is one of the most prominent features that has affected the MSME sector of our economy.

GST has helped to solve the two significant MSME problems:

Small companies with a turnover of less than 1.5 crores have the option to lower their output of taxes by availing the option of Composition Scheme which has further helped in bringing down the tax and compliance burden on such companies.

Composition scheme is an alternative method opted by the government for small traders and manufacturers. What makes it great is that it is optional and the people paying taxes under the scheme can do so at a prescribed percentage.

Keep in Mind: Manufacturers and traders opting for Composition Scheme will have to forgo input tax credit.

As per the current GST rule, a trader can claim a tax credit for the taxes paid by him on the goods used for making his goods and services hence this means that the consumers will have to pay taxes for the final goods only ultimately.

Consequently, this reduces the price of the product for the consumer as well.