Trademark Application can be rejected by the trademark registry upon the absolute grounds and relative grounds laid under section 9 and section 11 respectively of the Trademark Act 1999. 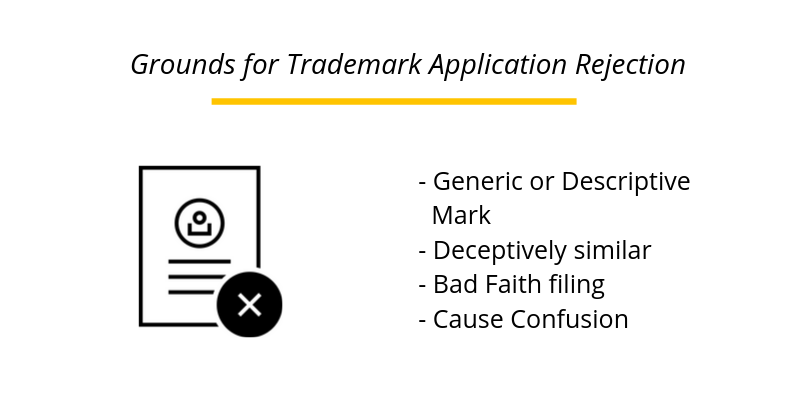 The mark which lacks any distinctive character, that is to say, the mark which is not being able to distinguish the goods or services of one person from another person.

The mark which is commonly used or terms that are usually found in dictionaries cannot be trademarked.

For example, a company cannot trademark the word “COMPUTER” to sell computers. Since the computer is a generic term for the product; a Cake Shop cannot receive protection for mark ‘Cakeshop’ as the mark clearly describes the nature of the store instead of distinguishing it from another. One company cannot be given the right to use the generic term exclusively.

Marks that may cause mislead to the consumers as to nature, quality or geographical origin of the product cannot be trademarked.

For example, a trademark that resonates with cotton for a polyester product would be rejected as a deceptive trademark.

Descriptive terms are those terms which describe the product in a very fancy or brighter way such as the use of words best, classic, awesome etc.

For example, if the word yummy is used for any food material then its chances of being rejected are more as it will lead to protest from other manufacturers.

The mark which comprises or contains scandalous or obscene matter cannot be trademarked.

For example, pirated terms, language or slang which ties to pornography, misleading terms, terms which relate to racism, words such as Opium, Cocaine, Cocainka or the words which relate to any terrorist organization.

Note: Scandalous names can be trademarked in the United States based on recent judgement by the supreme court.

The mark use is prohibited under the Emblems and Names (Prevention of Improper Use) Act, 1950 cannot be trademarked.

Mark which is similar to existing registered mark

Where there exists a likelihood of confusion on the part of the public because of the identity with an earlier trademark or similarity of goods or services, the trademark shall not be registered.

For example, Pepsi, Coca Cola, SRK, Mc Donald’s’, Dominos’ are some examples of existing registered trademarks which cannot be used.

The registration of a mark which is merely reproduction or imitation of a well-known mark is also prohibited and hence is rejected trademark protection in any country.

For example, “BISLERI” is a well-known term in the Indian market and it is one of the first marks which is introduced for bottled mineral water.

Remedies Available in Case of Rejection of Trademark Application

After your trademark application is rejected by the trademark department, the applicant must file an appropriate reply along with the supporting documents to overcome the objections raised against a trademark by the trademark registry.

The Trademark Rules 2017 provides that an applicant can file a reply within 30 days upon receipt of the application of rejection from the department, to the trademark office or can request a hearing.

In the absence of such response, the application will be deemed to have been abandoned on the grounds of non-prosecution.

To avoid the rejection of trademark application a Person should make sure that they do not use any of the above terms, in their trademarks.

Make sure your mark is unique and expressive and can be distinguished from the existing mark.