There are a certain number of limitations when it comes to trademark laws. A trademark is limited by functionality, doctrine of fair use, geographical limitation, parallel and import limitation. In this article we will have a look at all of these limitations to give you a better understanding on the impact they have on trademark limitations. 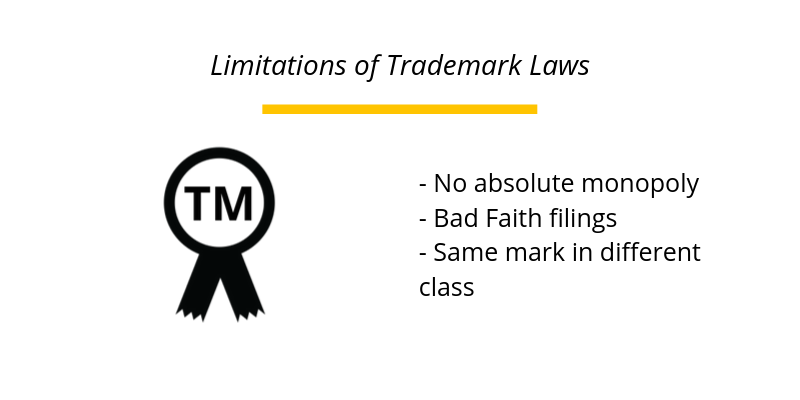 The most integral aspect to trademark laws would be in deciding what can be trademarked. One of the limitations is that of functionality, which means that the product must be non-functional i.e., it must not have any purpose/function to it.

For example, the particular shape of a bottle can be trademarked but if the shape enhances the action/performance and enhances its usability factor then it cannot be trademarked.

The reason for this is to stop the restriction of competition in the market. The idea behind this is to promote free and effective competition.

2. Doctrine of Fair Use

This doctrine is typically found under copyrights laws. This exception grants a person to use parts of copyrighted material without the permission of the owner. Fair use is thus often used in the realm of education, research, parody etc.

Under trademark law, this doctrine would apply in a situation wherein common words used in everyday life are used in a distinctive context owing to which the trademark owner cannot enforce his rights on the use of that word/mark.

In order to claim the defense of nominative fair use under Section 30(2)(d) of the Trademark Act 1999, the user must establish that it is crucial for him/her to use the registered mark to identify his/her product in the market.

This defense is generally found in cases where in a trademark is used to make a reference to the registered trademark owner and/or its good/service for a parody, criticizing, in comparative advertising, for commentary purposes on television/radio etc.

A trademark is limited to the area in which the use of the mark has been established. Such a limitation is generally more prominent for trademarks that are unregistered.

This is ideally based on the local reputation of the mark. For example, if X uses the mark Rose Candle for a shop in Chennai and Y uses the same mark in Delhi, there is not likely to be any case for infringement since both the users are describing two separate stores in two different cities and hence there is no likelihood of confusion between customers.

Parallel imports refers to goods acquired from the owner/right holder in a legitimate manner after which they are sold at a lower price via unaccredited means/channels in the market.

This is essential to trademark laws as a trademarkis what builds the goodwill and brand value of the product being sold which consequently helps protect the reputation and build on it further.

This practice is linked to the principle of exhaustion of rights encompassed under the Indian Trademarks Act of 1999 and which is derived from Article 6 of TRIPs.

In India through case laws, it has been held that a trademark owner can prohibit parallel imports and file for infringement under the Act if it is found that

1. The goods were not acquired lawfully or

2. The goods were substantially changed/altered.

The reason for this is to prevent a monopoly in the market. However, on the flip side, it is also important to protect the consumers and public at large and avoid confusion regarding the quality and source of the product. Therefore, the idea behind this doctrine is to not restrict the flow of trade.