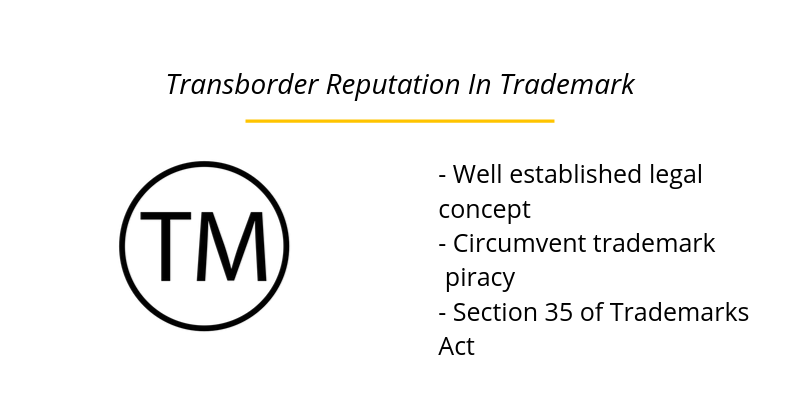 In today’s world, there is a cut-throat competition among various industries in order to stay ahead in the business. For that reason, many industries tend to imitate or copy the reputed trademark of a well-known industry.

So in order to prevent such kind of infringement the concept of trans-border reputation is incorporated under Section 35 of Trademarks Act, 1999 which helps in preventing the applicant from the other country to register the identical or similar trademark of an existing company in their own name which is likely to cause confusion among the public at large.

It is based on a principle that neither a company nor a person is allowed to start off with a business in any manner which is likely connected with the business of a reputed company.

Passing-Off Of Trademark In India

How to protect the trans-border reputation of a trademark

Section 27(2) of trademarks act, 1999 provides action for passing-off in order to protect the reputation of trademark:-

In India, the concept of Trans-border reputation had its inception in the year 1995 in the case of:

In this case the Haw Par Bros. International Ltd. a limited company incorporated in the year 1932 in Singapore. The adoption of the said mark of a petitioner can be traced way back in 1900 when their predecessors adopted a trademark consisting of a tiger.

The bone of contention, in this case, was that respondent was using the trademark of a ‘TIGER’ on their cartons, containers and sachets in order to sell his products which were said to be deceptively similar to that of petitioner’s trademark ‘TIGER BALM’. In the first prayer filed by the petitioner in the suit was to restrain the respondent from using the words ‘TIGER BALM’ as part of its corporate name.

The second prayer is to direct the respondent to pay the sum of Rs 5,00,000/- as part of damages for the wrongful activities done on the part of the respondent.

The third prayer was to direct the respondents to render the accounts of profit made by them through the sale of goods under the trademark of TIGER BALM and a final decree for the amount of profit have been made by them after the rendition of accounts.

After hearing arguments from both sides the Madras High Court held that the petitioner has been selling its product ‘TIGER BALM’ for several decades and it has acquired a worldwide reputation in India. On the other hand, the respondent’s registered trademark contains the picture of a tiger facing right inside a circle with the word ‘VIJAY LABS ‘ on its body and it was well settled that the mark of the petitioner was copied.