The NBFC takeover is understood to be a layman when a big NBFC acquires a small or equal-sized NBFC. It can also be taken as two NBFCs merging into one with mutual consent at times or without mutual consent. It involves a set of rules and regulations set by the Reserve Bank of India, which needs to be abided by the NBFC acquiring another NBFC. 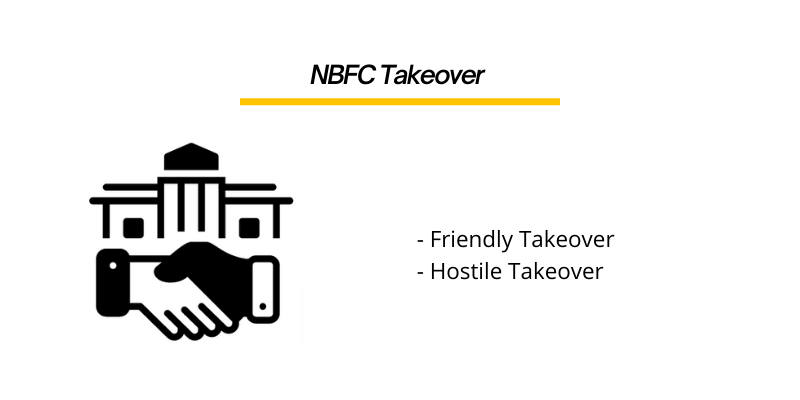 The RBI tries simultaneously to make the business of NBFCs smoother while retaining the requirement of basic compliance. The takeover of NBFC signifies the purchase of one NBFC by another company. Only those registered with NBFC under the Companies Act are eligible to acquire control of another NBFC.

What kind of companies are involved in this process?

What are the two ways in which an NBFC takeover can be done?

What are the pros of the NBFC takeover?

What are the Cons of the NBFC takeover?

What are the RBI Regulations on the NBFC takeover?

What are the steps involved in the NBFC Takeover?

Approval from RBI: Prior authorization is required from RBI. It is considered the most crucial step.

Publish Public Notice Bilingually: Public notice needs to be published in two regional languages, i.e., English being the first and regional language being the second one. Notice should be released within 30 days of receiving RBI clearance.

Publish Second Public Notice: The second public notice needs to be published in two regional languages, i.e., English being the first and regional language being the second one. Notices should be published before moving into a formal agreement at least 30 days before purchasing shares, transferring authority, transferring shares, or before-divulged concerns about the takeover.

Set Foot in the Formal Agreement: A formal agreement is executed between the parties, and now the following things can be done for takeover:

Commencement of Liquidation Process: In this step, the liquidation of all the target company assets is initiated. Moreover, any liabilities of any kind will be paid off first. The acquirer here gets to evaluate a fair balance in the bank on the name of the company. During calculation in this step, net worth is considered as the basis as it was on the takeover day.

Obtain NOC from Creditors End: Target Company must acquire a NOC from the creditors before the assets’ transfer of the targeted company.

Asset Transfer: The transfer of assets commences once the RBI approves the scheme without any objections.

Entity Valuation in Agreement to the RBI Prescribed Rules: The entity's valuation can be done to confirm the set of rules and regulations as prescribed by the RBI. The discounted cash flow (DCF) method is used as a technique for the valuation process. This method is known for displaying the net present value of any entity.

Grant of NBFC Takeover Approval: Approval is being sought at the regional office of the Non-banking Supervision Department. The department grants such approval for the NBFC takeover by issuing a Non-Objection Certificate (NOC). The department has all the powers to ask further questions to satisfy itself if it doubts some, even after the preliminary screening of the application.

Mergers and Takeovers have become an active part of the whole corporate scenario. NBFCs are also influenced by the impact of such compromises and arrangements. The Reserve Bank of India has recently laid down some procedures and regulations for the process of NBFC takeover.