Taking a Deposit in a Private Limited Company

Even though a Private Limited Company can accept deposits; however, there are certain limitation on the acceptance of deposits as laid down by the Reserve Bank of India. This article explains what is and what is not considered as a deposit as per Companies Act, 2013. 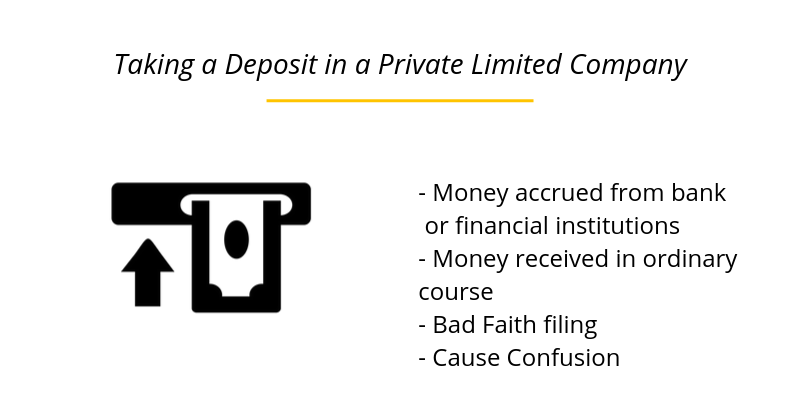 As per the Companies Act, 2013, and the mandatory regulations of Reserve Bank of India, there are some limitations in the acceptance of deposits in a Private Limited Company.

As per The Companies Act, 2013, only the banking and non-banking financial companies, housing finance companies and the list of businesses which are specified by the Central Government which can invite, accept or renew deposits from the public.

As per the Act, the term “deposit” refers to the receipt of money by way of deposit or loan or by any other means by a company.

However, there are certain categories of amount which are not considered as deposits as per the norms of the Reserve Bank of India.

What are not considered as Deposits?

The following sources of money received by a company are not regarded as deposits.

1. Money which is accrued from bank or financial institutions as loans

Any money which is received from a bank or a financial institution as a loan or any other form of credit facility is not considered as a deposit.

Also, along with this, any loan which was opted from any Public financial institution as notified by the Central Government or Insurance Companies or Scheduled Bank is also not considered as a deposit.

Any amount which has been received in the ordinary course of business will also be not termed as deposits.

Here are a few examples of the money which has been received in the ordinary course of business:

3. Investment of the money by the promoters in the form of unsecured loans

4. Amount received against the issuing of the commercial papers or any other instrument

The money which has been accrued by issuing of the commercial papers or any of the company’s instruments cannot be termed as a deposit as per the guidelines of the Reserve Bank of India.

5. Money received from the share application for the period of 2 months

The money which has been received by a Company towards the subscription of the securities or the advance towards the allotment of securities that are pending allocation will not be considered as deposits.

Any amount received by the company in the form of an inter-corporate loan will not be counted as a deposit.

7. Money accrued by issuing of the secured debentures and bonds

Any amount of money which has been received by issuing debentures and bonds which are convertible into shares within a period of five years secured by a first charge or any of the assets which exclude the intangible assets of the concerned company is not considered as a deposit.

8. Money that is received from directors

The money that has been received from the Directors of the concerned Company will not be considered as deposits, the exception being if the Director submits a declaration to the Company in writing that the particular amount is not being given out of the funds which have been acquired by her/him by borrowing or accepting loans or deposits from others.