The Emblems and Names Act,1950

The Emblems and Names (Prevention of Improper Use) Act (hereinafter “the Act”) came into force by Notification by the Central Government in the Official Gazette on 1st September, 1950 with the object to prevent the improper use of certain emblems and names for professional and commercial purposes. 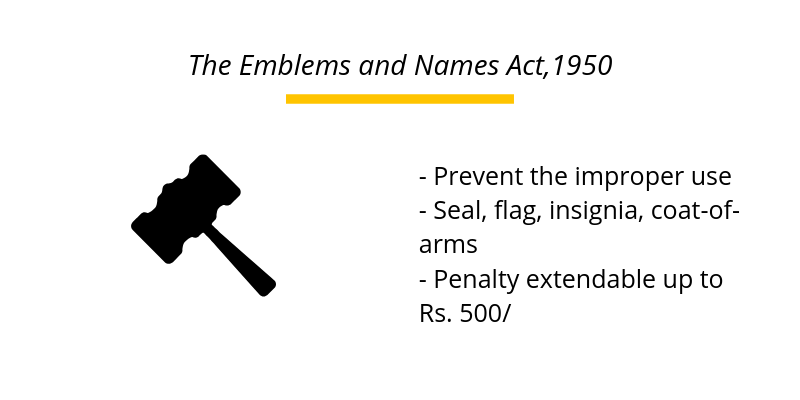 Section 2 of the Act defines an “Emblem” as any emblem, seal, flag, insignia, coat-of-arms or pictorial representation. Further, the “Competent Authority” for the purposes of the Act means the relevant authority competent to register any company, firm or other body of persons or any trademark or design or to grant a patent.

Section 3, one of the most important sections of the Act, prohibits the usage of any name or emblem specified in the Schedule (provided below for ready reference) or any colourable imitation thereof, for the purposes of any trade, business, calling or profession, or in the title of any patent, or in any trade mark or design without the prior permission of the Central Government or any authority specified by the Central Government in that behalf.

If the use of such name or emblem is in contravention of Section 3 of the Act.

Section 5 provides for a penalty extendable up to Rs. 500/- in case of contravention of the provisions of Section 3 of the Act. Section 6 may also be noted, which requires previous sanction of the Central Government before prosecution for any offence punishable under this Act is instituted.

Section 7 is a Savings Clause which provides that no provision of this Act shall exempt any person from any suit or other proceedings, which might be brought against him under any other law.

The Schedule, amended up to 31st May, 2011 provides, in short, the following:

The name, emblem or official seal of:

The name or emblem(s) of:

The name or pictorial representation of :

It may be noted that the usage of word “India” by companies and small-scale units engaged in real economic activities such as production, manufacturing, and service providing etc. may not be restricted.

A distinction has been drawn between trust/societies/charitable institutions, which are primarily fund raising agencies and agencies involved in real productive activities.

However, words such as ‘India’, ‘National’ or ‘State’ may not be allowed in the name of a body engaged in commercial, semi-commercial activities in public dealings or for products being marketed if the consumer is likely to gather a misleading impression that the organization has been sponsored by the Government.