Restricted Words List: Helps to choose a name for your Company

According to the new Companies Act, 2013 a guideline is set for incorporating a new name for the company under Rule 8 of Companies (incorporation) Rules, 2014. Restricted word list set out the list of names that cannot be used as the name of the company. 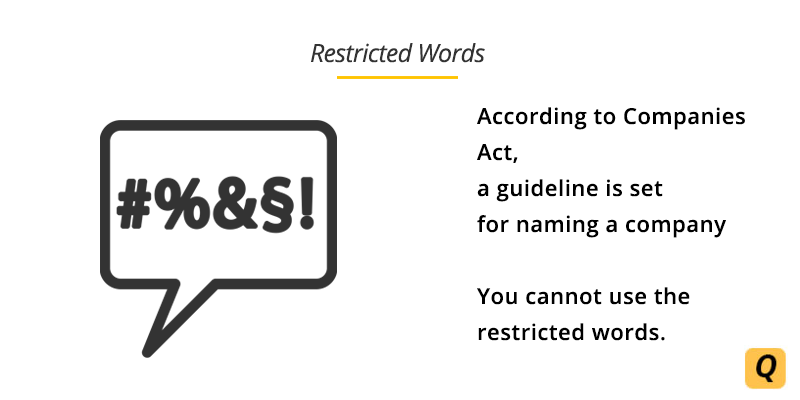 After incorporating a company in India, the next step is to register it legally. For registering a company, one needs to name the same. Hence there is a set of rules laid down by the Companies Act, restricting the use of certain words while choosing a company name.

What is a Restricted Word?

Once you incorporate a company in India, you need to propose a name for the same and get it approved by the Ministry of Corporate Affairs. The proposed name can be rejected if not followed under the guidelines of Company (Incorporation) Rules, 2014. There is a restriction of words that cannot be used while choosing the name of the company.

Note: Companies under section 8 or government companies are exempted from this rule

The name proposed should not be identical or similar to any other company’s name.

The name shall not be considered valid if:

In case of the name including the name of a registered trademark or the name of trademark been sent for registration can only be used after taking the consent from the owner of the existing trademark.

The following list provides with the words that are prohibited. These words cannot be used or clubbed in any other language or words having similar meanings

Note: Words with the name of a state, India or Bharat are not restricted

A Company can use the name which is already in use in any other business constitution like Sole proprietor or Partnership or any other incorporated or unincorporated entity by the promoter.

In such cases, the applicant has to declare in affirmative or negative that whether they are using or have been using that name for the last five years. Along with providing the details and NOC from other partners for the use of such words for the naming their company.

Also, a declaration is filed, as to whether such other business shall be taken over by the proposed Company or not.

Certain words are only allowed to be used under certain conditions:

Mandatory words to be used

Need help in choosing a name for your company. Contact us.