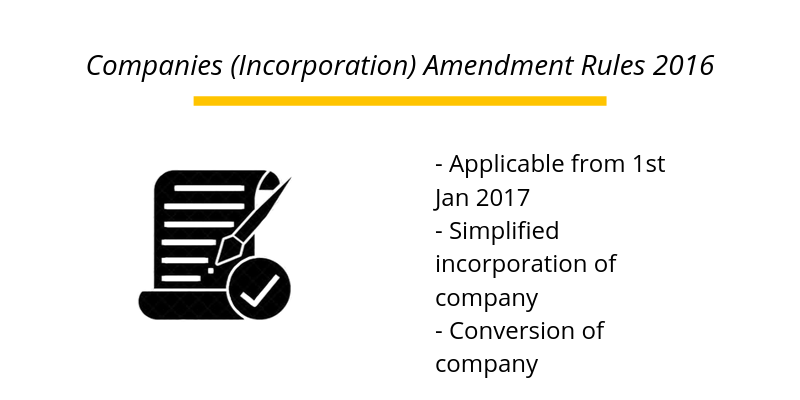 The amendment to Companies (Incorporation) Amendment Rules 2016 has been notified in the Gazette on 22nd January 2016, wherein rule 8, rule 9 and rule 36 of principle rules of 2014 have been amended.

Key Highlights of the first amendment in 2016

Need not be in consonance:

Abbreviations and vague names are acceptable:

The usage of abbreviations and vague names were restricted in the principal rules and such restrictions were lifted with the amendment and an abbreviated name or a vague name shall be acceptable.

The company names that are not to the tune of the scope and scale of activities of the company are allowed with the amendment whereas the principal was restricting such usage.

Change in activities with no change in Name:

No NOC for Name of Persons:

Earlier, in the principal law, a NOC was required if the name of the person other than its promoters or blood relatives is used as the company name. The amendment withdrew such NOC requirement.

Establishment of CRC took away the burden of the name approval process from the Registrar of Companies. The same has been notified in the amendment.

Key Highlights of the Second Amendment

The Second amendment for the Companies (Incorporation) Amendment Rules 2016 was notified in the Gazette on 23rd March 2016. The objective of such an amendment is to replace Form No. INC-11 with the amended one. The Form INC-11 is the Incorporation Certificate by CRC. (This is amended further in 2017)

Key Highlights of the Third Amendment

The Third amendment for the Companies (Incorporation) Amendmen Rules 2016 was notified in the Gazette on 27th July 2016.

The key highlights of the third amendment are noted below:

When the subscriber is having an updated DIN, the ID proof and residence proof required for Subscriber Sheet Information has been dispensed.

The typewritten or printed particulars of the Subscribers and witnesses shall be allowed. The same shall be deemed as if it is written by the Subscriber and witness, so long as they append his or her signature or thumb impression.

As per the amended provision, attaching of INC-10 for Director and Promoters Verification for Incorporation of Company is not required

The omission of word Partnership:

if a Body Corporate is a Partnership firm then the word Partnership firm has been omitted from filing certified true copy of the resolution agreed to by all the partners specifying inter alia the authorization to subscribe to the memorandum of association of the proposed company and to make investment in the proposed company, the number of shares proposed to be subscribed in the body corporate, and the name of the partner authorized to subscribe to the Memorandum.

As per the amended provisions, it is made mandatory for the companies having a website to disclose the Name, Registered Office, Corporate Identification Number, Contact Number & Mail ID and contact person details for addressing grievance on the home page of the website.

The registered office of the company shall only be shifted after completion of any pending inquiry, inspection or investigation. Any such move prior to that will not be allowed as per the Act.

As per the amended provisions, the change of name shall be allowed on completion of pending annual filing or payment of matured deposit or debenture or interest thereon.

The amendment inserted a new provision whereby incorporation of a NonFinancial Banking Company now requires a NOC from RBI.

A new rule is inserted with regards to the conversion of unlimited liability company into Limited Liability Company by shares or guarantee.

Key Highlights of the Fourth Amendment

The fourth amendment for the Companies (Incorporation) Amendment Rules 2016 was notified in the Gazette on 01st October 2016.

The key highlights of the amendment are noted below:

In the fourth amendment, the Ministry had made a remarkable addition with the introduction of Simplified Proforma for Incorporating Company Electronically (SPICe). SPICe or INC-32 Company can be registered in a simple process as the Memorandum of Association and Articles of Association can be electronically filed.  With the introduction of SPICe, the integrated incorporation form INC-29 is discontinued.

Key Highlights of the Fifth Amendment

With the notification of the Ministry of Commerce on 29th December 2016, the Companies (Incorporation) Fifth Amendment Rules, 2016, the Ministry made amendments in Rule 4, 10, 12 & 38 of the principal rules.

As per the amended provisions, it is stated that Form INC-2 has been discontinued and Form INC-7 shall be used only for the incorporation of Part I Companies and Companies with more than 7 subscribers. A revised version of Form INC -7 will be available on the portal with effect from 15th January 2017. It is made clear that for the incorporation of One Person Companies and Companies (up to 7 subscribers), only SPICe (INC-32) should be used henceforth.