This article briefly explains what an MOA subscriber sheet is, its importance, who’s eligible for signing and why it’s essential that the subscribers hand sign the document. 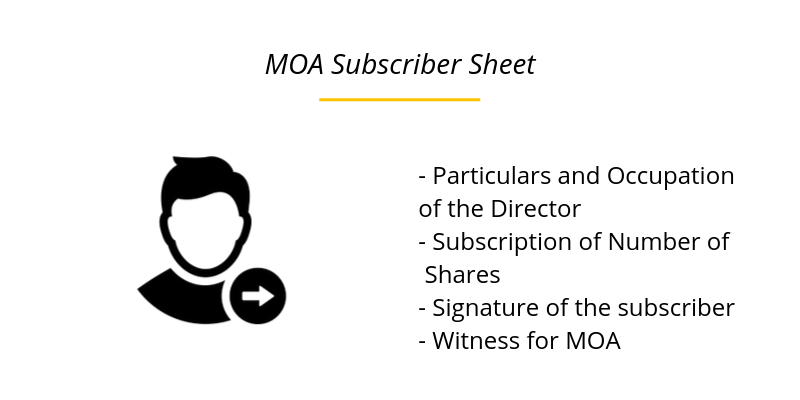 When you are planning to incorporate a company; one of the most important documents which is required is MOA subscriber sheet. This document holds a lot of significance and based on the undertaking which is being done by the promoters through this document; share certificates are issued in the first Board meeting of the concerned company.

The MOA Subscriber sheet is used by the promoters to write their names and also the number of shares that they have taken in the company to be formed.

It is mandatory to write down all the details with hand as it brings in a binding contract on the concerned subscribers and they have to mandatorily abide by the clauses which are mentioned in the MOA.

Below is a brief explanation to disseminate more information on the MOA Subscriber Sheet to help you know more on the subject.

Related: How to draft MOA for a company

Particulars and Occupation of the Director

All the AOA and MOA subscribers are mandatorily required to write their names, father’s/husband’s name, address, age and present occupation.

There is no restriction for a subscriber regarding his or her literacy. He or she may be literate or illiterate. The subscriber may be resident or non-resident, foreign or Indian national. Irrespective of the above facts, the subscriber is competent of entering into an agreement.

In case of an LLP or company or a foreign entity opting to become a shareholder; the Memorandum and Articles of Association is to be signed by a Director, Employee or Officer duly authorized by a resolution of the Board of Directors.

It is mandatory that the person, who is signing the MOA on behalf of a legal entity, cannot under any circumstances also subscribe to the MOA in a personal capacity.

Subscription of Number of Shares by Each Director

The subscriber should clearly mention the number of shares-- It should be written in numeric as well as words.

It is mandatory that the cumulative number of shares at the bottom of the MOA subscriber sheet should match with the number of the shares held by all the individual subscribers taken together.

By signing this document, each of the subscribers confirm the holding of the mentioned number of shares as indicated on the sheet.

Signature of the subscriber

However, it is crucial for the person signing on behalf of an illiterate person to read out all the clauses mentioned in the Memorandum of Association and get his/her consent on the same.

It is mandatory to have one witness’ presence while the subscribers are signing the MOA document. Also, the witness has to mention his address, occupation and his/her other necessary details. Moreover, if the witness is incidentally a member of a professional body like CWA, CS or CA, then the membership number and certificate of practice number should be necessarily mentioned.