What is a MOA of Private Limited Company

The Memorandum of Association (MOA of Private Limited Company) sets down the constitution of a company’s fundamental matters. It is a basic document which is required for the existence of any company. 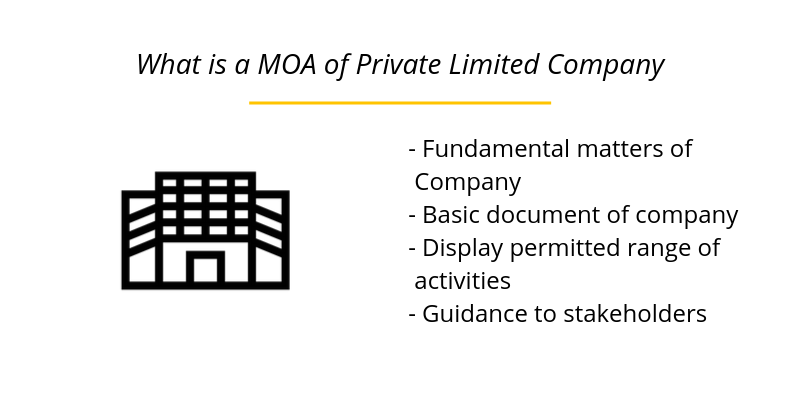 Every company should have its own Memorandum of Association. The MOA is undoubtedly the charter of the company that defines the limits and powers of the concerned company for the information of the public at large.

The major purpose of the Memorandum of Association is to display the permitted range of the activities of a company for the guidance of the stakeholders of the company namely the shareholders, creditors and others concerned.

When in the process of incorporation of a Company, proper advice must be taken in order to form a proper Memorandum of Association with the goal of safeguarding yourself and your business in the long term.

The document which contains the Articles of Association (AOA) of a particular company is a business document and thus it has to be construed strictly. The AOA regulates the domestic management of a company and creates certain rights and obligations between the members and the company.

Every company which is limited by guarantee or an unlimited or a Private Limited Company is required to register its articles along with the memorandum of association. Section 31 empowers the companies with the power to alter or add to its articles. A particular company cannot divest itself of these particular powers. Matters as to which the memorandum is silent can be dealt with the alteration of article. This alteration must be effected by a special resolution process.