In the Companies Act of 2013, Section 4, Sub section 4 & 5 are dealing with the naming of the Company. Also, it is worth to have a reference to the Companies (Incorporation) Rules, 2014 framed under the 2013 Act, before naming the company. 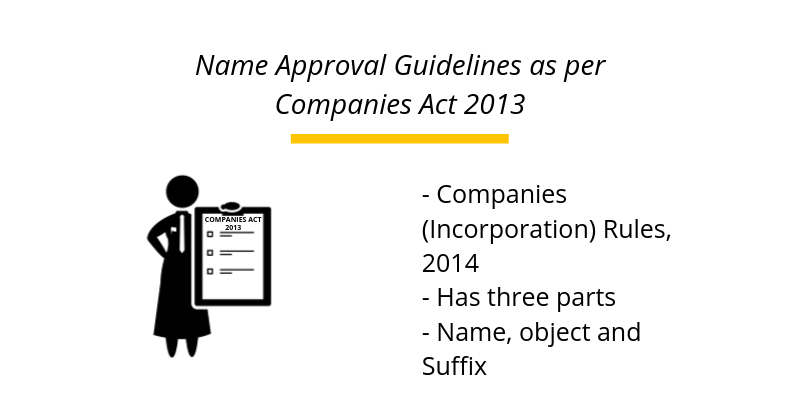 The Name of the company has three parts, the Name, Object and Constitution. For instance, ABCD Creations Pvt. Ltd is constituted with ABCD as name part, Creations as Object and Pvt. Ltd as its Constitution part.

Promoters of the company should follow the guidelines in order to get their names approved.

The major guidelines to name the company are detailed as below:

The name of the newly proposed company should not be identical or similar to that of an existing company; moreover, the meaning of identical names is well described in the act.

2. Not undesirable by law

3. Other Conditions in Name approval

If the proposed company is in the business of financing, chit funds, leasing, investments, securities etc, the proposed name of the company should include the indicative name of such financial activities. Eg: ABCD Chit funds, ABCD Investments etc.

The proposed name of a company should not imply any association or patronage of a national hero or any person occupying or have occupied any high position in the government. For example, the name of Mahatma Gandhi shall not be used to form any type of Company.

If the proposed name of the company is similar to that of a company dissolved on liquidation proceedings, such name can be used only after two years of dissolution.

In the case of a foreign company incorporating its subsidiary company in India, the addition of word India or name of any Indian state or city is permissible along with the original name of the holding company.

Click here to Register a Company Name in India