Companies (Acceptance of Deposits) Rules, 2014 made under Chapter V of the Companies Act of 2013 regulates the invitation and acceptance of deposits. The term ‘deposit’ is common terminology when it is read along with the activities of a bank or a financial institution. However, it is not limited to the operations of the bank; the term is also having significance related to the requirements of working capital or raising funds. 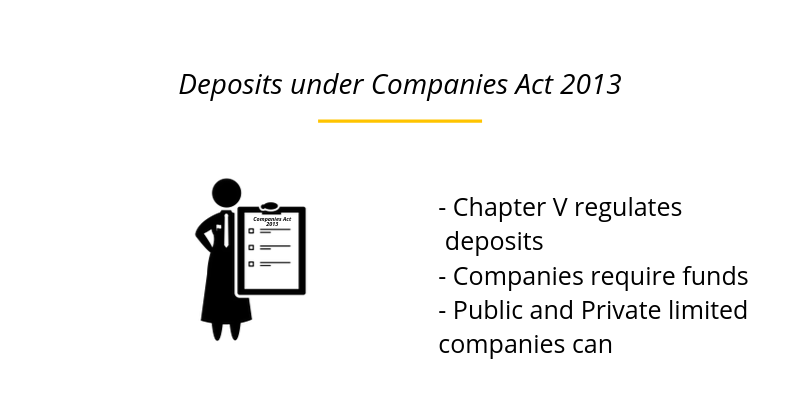 The principle rules have observed various amendments and the most recent one was made on 29th June 2016 and consequently the rule is termed as Companies (Acceptance of Deposits) Amendment Rules, 2016.

Companies require funds for expanding their business activities due to comprehensive business environment.

They can raise fund from different sources i.e. borrowing from bank & financial institution leaving the company under management & control of those lending institutions.

However, there are alternative sources whereby the companies can raise funds that are issuance of shares, debentures and other debt securities, calling deposits from public.

It is worth to note here that a company incorporated as a Private Limited Company is strictly prohibited to accept deposit from public.

Deposits include any receipt of money by way of deposit or loan or in any other form by a company. It can be avail from its shareholders, Public, or from other companies. Chapter V. Sec.73 to 76a of the companies Act discuss about the acceptance of Deposits

According to the Rules

The term deposit do's not include:

5) Amount raised from Directors, or raised by issue of both equity and preference shares.

6) Amount received from Directors of the company

8) Any amount received from an employee not exceeding his annual salary in the nature of non- interest bearing nature.

9) Any amount accepted by a nidhi company from a person with an offer to give returns in cash or in kind and completion period specified in that promise.

As per the Act, the companies those are eligible for accepting deposits from public are only the eligible public companies, which are having net worth of minimum Rs.100 crore or a minimum turnover of Rs.500 Crore. Also, the acceptance of deposits from the public is subject to certain conditions.

Both private and public limited companies can accept deposits from its directors without  any limit but will not come under the scope of the term ‘deposits’.

Both the business structures shall also accept deposits from its members subject to the conditions mentioned in the Act.

According to Section (73) of the Act, the conditions for accepting deposits from the members are described as below:

According to Section (76) of the Act, the conditions for accepting deposits from the public for eligible public companies are described as below:

A detailed procedure for accepting deposits by an eligible public company is described as below:

Procedure for acceptance of deposits:

Limits of Acceptance of deposits:

Interest and brokerage on deposit:

Borrowers enter in to a contract at least 30days before the issue of circular/ form of Advt. for providing deposit insurance.

Insurance coverage will be full amount if the deposit amt. is less than Rs.25000/-. And in case of higher amount minimum coverage of 25000 will be provided.

Total Insurance coverage shall be updated from time to time According to the maturity or acceptance of the deposit. Insurance premium shall be incurred by the company.

Appoint one or more trustees for creating security for the deposit and execute a trust deed in form 2 at least 7days before issuing the circular/ in the form of Advt.

The advt. should contain consent of deposit trustees. The company shall not withdraw the trustees after issue the circular and before the expiry of his term otherwise make a consent of all directors in a meeting.

The breaking of the agreement or any conditions as per the Act shall be punishable under Section 75 of the Act.

The depositors are eligible to file a class action suit again the company for recovering their proceeds.