What is an Article of Association? 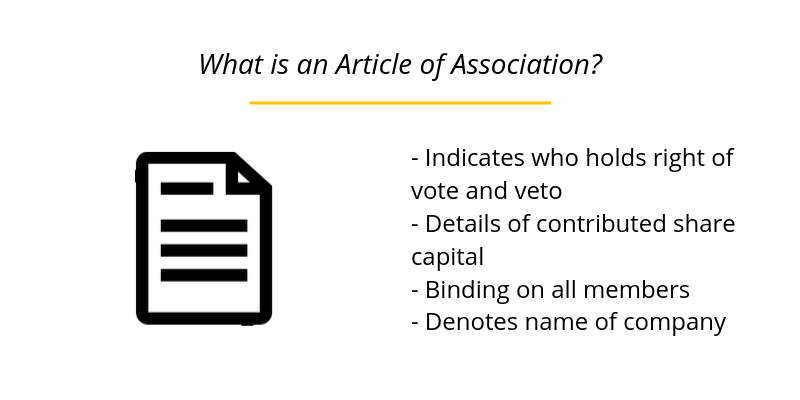 These must be submitted at the time of the incorporation of the company. This clearly defines the overall responsibilities of the directors, the nature of the business to be undertaken by the company and the means by which the shareholders exert control over the board of directors.

As it is evident, an Articles of Association must contain all the necessary information in regards to who holds the power distribution among the directors, officers and shareholders, etc.

It also indicates who holds right of vote and veto, the nature and form in which the primary business of the company is to be carried out, the structure for the internal corporategovernance of the concerned company, the means of internal review by which executive decisions are being made, the bodies in whom authority to make such decisions in the last resort finally rest, the process and nature or percentage of votes that are required for the establishment of a majority and make certain key decisions etc.

Also, side by side the rights and duties of the members of the company, their names and numbers as well as other details relating to the contributed share capital are included.

Scope and Extent of AOA

The Article of Association is binding not only to the existing members but also to the future members who may join the company in future. The heirs of members, successors and the legal representatives are also bound by whatever is contained in this particular Article.

At the same time, the company also expects some duties and obligations that the member is required to fulfill for the overall smooth functioning of the concerned company. The major objectives, goals and the purpose of the Company are being determined in advance by the shareholders and the Memorandum of Association (MOA). If separate, which denotes the name of the Company, its Head Office, street address and the founding Directors and the major purposes of the Company- for public access.

This is not supposed to be changed except at the Annual General Meeting (AGM) or Extraordinary General Meeting (EGM) and the statutory allowance. The MOA is registered with the Registrar of Companies who is an appointee of the Ministry of Corporate Affairs. For this assurance, the directors-and-shareholders-in-pvt-ltd">shareholders are permitted to elect an Auditor at each of the held AGM. There are provisions of appointing Internal Auditors (employees) as well as an External Auditor.

If a company’s constitution contains any of the restrictions on the objects at all, there are certain restrictions which will form the part of the Articles of Association.

The Articles of Association also contains the following details:

A particular company’s Memorandum of Association by contrast contains various objects’ clause, which limits its capacity to act.

The objects clause in general is drafted in such a wide and somewhat ambiguous way as not to restrict the board of directors in their day to day activities, especially if the business is intended to gradually broaden the scale of operation. Nevertheless, any significant change in this clause requires a separate application.