Voting Rights of Shareholder in India

A shareholder has the right to vote on the corporate policy which might involve making or selecting the board of directors, initiating corporate actions and when making any substantial changes in the operations of a corporation. 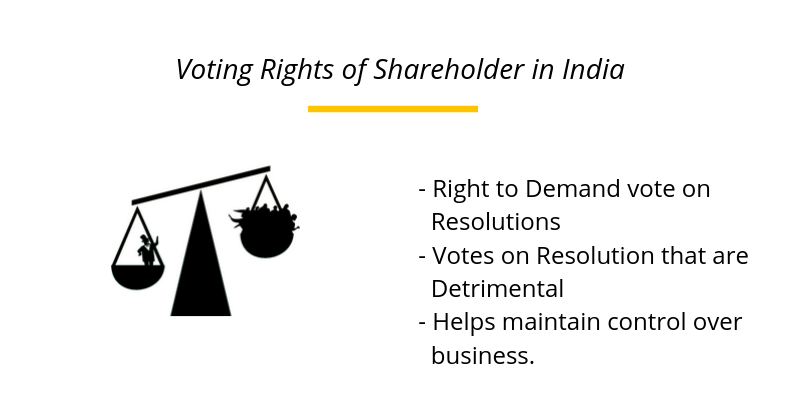 The company is a legal entity that is different from it members that constitute it, however, this doesn't mean that they do not have any duty or right over it. The dispersal of control and ownership makes it important for shareholders to know their rights, privileges and liabilities of the shareholders.

The shareholder has the right to vote upon the questions of legal competency as they have a personal interest in the subject matter as opposed to any particular interest of the company.

NOTE: The exception to such rule is wherein a private company the AOA and MOA prescribe as such.

Every member that is limited by share and hold any equity share capital have a right to vote in a company with respect to every resolution that is passed in the company.

Shareholders have three classes of right in any company in which they hold share contract. These are:

Votes that are casted by the shareholder in any meeting play a decisive role in the proposed business. Voting in a general meeting can be convened in two different ways:

The voting in the annual general meeting can be conducted through Show of Hands or by Poll if the voting has not been demanded to be conducted through an electronic medium. If the company faces no objection they can vote through a simple method of show of hands or by Poll that can be demanded by the shareholders that have shares worth Rs. five lakh or have 10% voting power.

Every listed company or companies that have more than 1000 shareholders need to include e-voting options for their shareholders as per the purview of companies act 2013.

NOTE: The companies have to also provide access to the voting through postal ballot as well.