Reasons Why a Private Limited Company is Beneficial

Private Ltd is an attractive business model for start-ups as private limited companies transfer limited financial liability on the members of the company as compared to other businesses such as sole proprietorship. Additionally, a private company get Tax advantages easy expansion and fundraising. 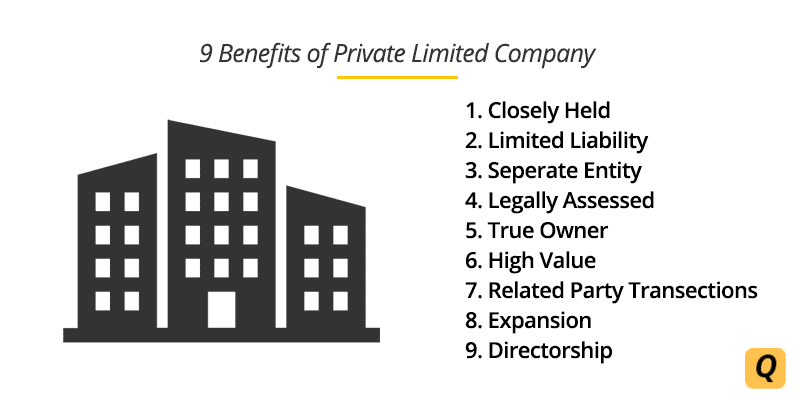 According to the Companies Act 2013, the Articles of Association have the following terms and conditions:

Advantages of a Private Limited Company

Most companies in India are incorporated as private limited companies:

As all the stock of Private Company is concentrated in the hands of a few individuals, it mitigates the risk of intrusion of an unknown. Even the shareholders are restricted to some extent from selling the stakes of the company to a person who is not a member of the company, without offering them to existing shareholders or members.

A Private limited company is an independently taxed and responsible business entity, where each shareholder has liability limited to his or her shareholding only.

As per the terms of the contract the private limited company enjoys the status of a legal entity and in this capacity it can own property and enter into legal contracts. Also, the members of a company are not liable for the company's debts to its creditors.

A company is a juristic person and its actual owner. No member of a company can claim the properties owned by the company as its own as long as it is a going concern. Although if the company is dissolved the assets are to be distributed amongst the shareholders after the creditors of the company are paid off.

In Private companies, the scope of development is easy as the fundraising can easily be done by receiving funds from its members, directors only. The bank also gives high value to private companies and sanction Loans accordingly.

9. Directorship of a Private Limited Company

The directorship of a private limited company that is either a holding or subsidiary company of a public company will not be included in determining the maximum number of directorships that person can hold in public companies which are restricted to 10.

The exemption saves the charges of maintaining such committees and this money can be invested further in the business.