Merger basically is an arrangement where 2 existing companies merge their identities to form a new identity. Companies act 2013 introduced fast track merger for small companies and for holding companies with their subsidiary companies. 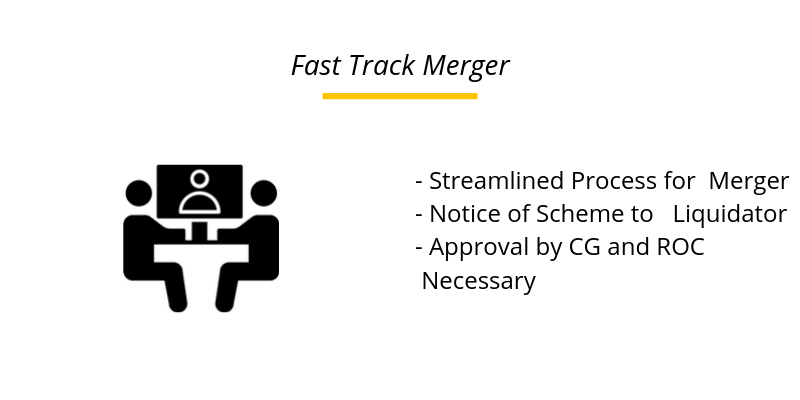 Merger and acquisition are company restructuring tools that are incorporated by the company professionals for expansion and diversification of the business to achieve the objectives for which the company was formed.

What is Fast Track Merger (FTM)?

Fast track Merger is a streamlined process of a merger that has been simplified and made time-bound and quick in comparison with traditional merger procedure.

The simplification of the process has made it possible for entities to take up corporate restructuring in order to achieve their underlying company objective. The time and cost of completing the process have been significantly reduced as there is no more court intervention required.

The applicability of Fast Track merger is only on the following companies:

Holding Companies and its Wholly-owned Subsidiary

NOTE: The subsidiary company can also be a section 8 company.

Initial  Steps to be Taken

Merger and Demergers in foreign jurisdiction do not require the intervention of courts which was not the case with Indian traditional merger process and hence the need to change the procedure was seen necessary.

The companies that qualify to perform fast track merger can accomplish it by following these steps:

The transferor and transferee company need to  conduct a board meeting each to see that:

After approval from the board of directors of all the companies involved in the merger the notice of the proposed scheme should be posted so that any objection or suggestion can be provided.

If there are any suggestion or objections they should be sent to the registrar of Companies (ROC) and official liquidator wherever the registered office is situated. The objections or suggestions must be given by the respective companies in Form CAA-9 and the copy of the scheme in such case must also be given to a person that is affected by it.

The companies involved in the merger need to file a declaration of solvency in Form CAA-10, before convening a meeting of creditors and members for approval.

Notice for EGM must be posted before 21 days and should be sent to all the members of the company along with the following documents:

Written approval from the creditors is required which can be taken through conducting a creditors meeting by the companies involved. The notice for the meeting must be issued before 21 days of the meeting  and the following documents must be filed along with the notice:

Step 6 Filing of the Scheme

The scheme must also be provided to ROC in form GNL-1 and official liquidator through speed post or through registered post.

If the official liquidator has no issue with the scheme that is filed he will take notice of the same and then issue a confirmation to the companies that are involved in the merger.

NOTE: If the regional director thinks that the scheme is against the interest of the creditors he will file an application with the tribunal.

Once the tribunal receives the objections from the Regional Director in writing within 60 days will look into the matter and then record its opinion on the matter. If the tribunal is of the opinion that the scheme is as per the procedure laid down by the company law, then the reasons can be recorded and sent to the regional director or an order can be passed confirming the passing of the scheme.

If the order passed by the tribunal is acceptable to the regional director he shall issue a confirmation order of the scheme in Form CAA-12.

Step 9 Filing of confirmation order with the ROC

The confirmation order posted by Regional director must be sent to ROC within 30 days of such order in Form INC-28. The ROC shall register the scheme and issue a confirmation to the companies involved.