Patent Infringement is committed by using, selling any patented invention without prior authorization from the patent holder. The patent holder, in this case, can choose to sue the infringing party or can simply ask for compensation for unauthorized use. 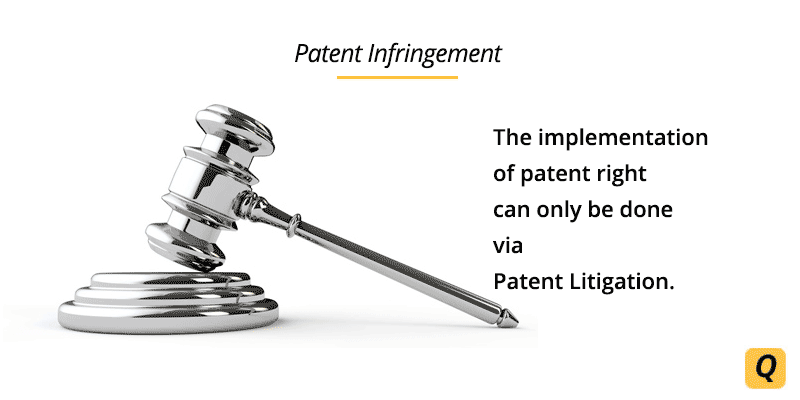 Once the patentee is granted patent protection; the claims made in the application are the rights that should not be infringed. In certain cases, the owner of the invention can file a suit for infringement against the infringer.

Patent rights are not enforced by themselves like trademark and copyright law. The implementation of patent right can only be done via patent litigation.

Moreover, The government is under no obligations to take steps against the infringer unless the inventor presses charges.

How to determine when a patent is Infringed?

Following would constitute infringement of invention

Under patent law rights of the patentee are infringed if anyone uses the products commercially although in case of process patent the mere use of method would amount to infringement in India.

How to prevent Patent infringement suit?

At the time when you develop an idea and decide to invest in developing the idea further, it is recommended to conduct a quick patent search for the invention and see that you are not encroaching upon the rights already established by an inventor before.

Want more information on the Patent search. Contact our experts.

Patent infringement is known to occur either directly or indirectly.

When infringement is done deliberately and knowing that they are copying the invention of the patentee. This is the standard form of infringement which it is a blatant copy of the claims filed by the patentee.

Materials that are used in the patented invention and there are no other commercial use other than what done by the patentee. The contributory infringement can only happen if the seller intends to commit infringement.

If the court finds that the infringement of the patent was willful, the penalty imposed on the infringer is substantial financially, and sometime it may amount to triple the number of damages incurred by the inventor.

Sidenote: The burden to prove infringement always lies with the patentee.

Reliefs granted by the court in case of patent infringement.

The patentee also has right to see that the fees of the attorney are covered in the litigation.