What is a Trademark?

Trademark is one of the shining symbols of a competing economy, wherein more than one person participates in and strives for the procurement of the same product which mandates by making it imperative the marking of each manufacturer’s goods by attributing a  symbol which distinguishes his products from those of the similar goods made by others. 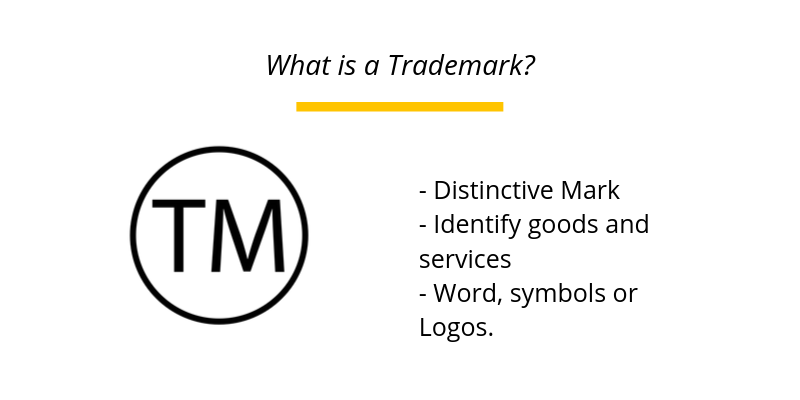 Trademark is not only a prestige but a property used customarily to brand a certain product or service and has the value of its own.  It implicates the purchaser or possible purchaser as to the procurement or quality of the goods, giving traces of the trade source i.e. the origin of the product, where the product is handled from thus making a way in the market.

It gives the purchaser an assurance regarding the making and quality of the product he wishes to buy, the particular quality not being discernible to the eye. It is on the credit and surety of the mark being genuine and depicting a quality parallel to which the purchaser has previously found in a similar mark while the purchaser buys the product.  A trademark is not only used to testify that the goods belong to a particular maker but also demonstrates the quality by another trademark and so on.

Registering a Trademark secures goodwill and eminence  among the customers by virtue of extensive appliance and advertisement which  entices competitors to transcript  well known trademarks or choose marks, which bear deceptive affinity to reputed trademarks in order to bulge the buyers and the ordinary purchasers to believe that the goods bearing such marks are the same goods, which they were hitherto accustomed to buying, by which the competitor derives profits by trading on the goodwill of another trademark .

A trademark is a discernible badge in the form of a word, a device, or a label applied to articles of commerce with a view to connate to the purchasing public that they are goods procured or otherwise dealt in by a particular person as distinguished from similar goods manufactured or dealt in by other persons.

A person transacting his goods under a particular trademark procures limited exclusive rights to use the mark in relation to those goods. The law of trademark is based mainly on the concepts: distinctiveness similarity of marks and similarity of goods and is governed by the Trade Marks Act, 1999.

The registry of the trademark is done at the office called the Trade Mark Registry established for the purpose of the registration of the trademark, headed At Mumbai and branched in the states of Delhi, Kolkata, Chennai and Ahmadabad.

Features of a Good Trademark

Apart from the distinctiveness or capability of disguising, a good trademark should possess the following attributes:

The object of Trade laws

To deal with the explicit nature of the rights secured under the Act in respect of trademarks, mode of acquisition, the method of transfer, infringement of such rights, remedies available in respect thereof.

Property in a Trademark

Property in a trademark proposed to be used only in relation to certain goods can be obtained by registration of the mark under the Trade Marks Act, 1999.

A person transacting his goods under a particular trademark procures limited exclusive rights to use the mark in relation to certain goods. Such a right acquired by use is recognized as a form of property in the trademark and protected under common law.

A limited exclusive right is secured by a person who sells his products under a certain trademark in relation to those goods.  The use of such acquired right is perceived as a form of property in the trademark and is guarded under the common law. Property in a non-distinctive trademark ( a descriptive word, surname) is secured by extensive use of the mark.

The property in a trademark can be lost: in a case where the mark is a registered mark, by non-payment of renewal fees inclusive of other reasons, wherein in the case of a common law trademark not using the trademark for a long span of time or by unrestricted piracy.

The significance of the trademark in commercial law was recognized after the industrial revolution which enabled large-scale production. It plays a vital role in a competitive economy and therefore: