For the grant of patent protection, it is necessary to show that the patent is novel, non-obvious and can be utilised in a certain way. Minor improvement in the known invention does not entitle the invention protection under the patent law as per section 3(d) of Indian Patent Act 1997. 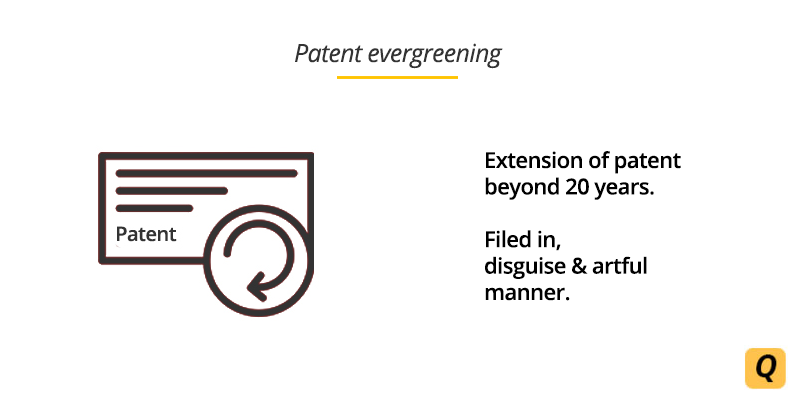 Most firms are inculcating such practices wherein the term of protection for the patent is extended beyond the limitation of 20 years. These practices are commonly known as the 'Ever-Greening,' and is widely practised in the pharmaceutical industry.

Understanding the Concept of Ever-Greening of Patent

'Ever-Greening' refers to acts wherein the firms extend the term of a patent by obtaining an additional 20-year patent after minor reformulations, which does not necessarily increase the efficacy of the invention.

Ever-Greening is commonly witnessed in the pharmaceutical industry wherein the drugs are improved in a minor way so as to obtain patent protection for the same in order to recover the high-cost incurred in the research and development of the drug. These types of additional patents are filed in disguise, in an artful manner that is often overlooked.

TRIPS Perspective on Ever-Greening of Patent

Article 27 (1) of the TRIPS agreement states that,

Patents shall be available for any inventions, whether products or processes, in all fields of technology, provided that they are new, involve an inventive step and are capable of industrial application.

While the TRIPS agreement supports Monopoly rights of the patentee, it also supports the upliftment of public health and better provisions that support better health policies. Therefore, including exemptions under Article 27 (3), which states that,

Members may also exclude from patentability: (a) diagnostic, therapeutic and surgical methods for the treatment of humans or animals;

All the signatories to TRIPS have to adhere to strict regulation, wherein, minimum standards are to be maintained to provide product patent to pharmaceutical products under Article 27 (1). The flexibility under Article 27 (3) is provided to protect the public health. This will encourage the developing and underdeveloped countries to prioritize the protection of public health and discourage the practice of ever-greening.

Innovator companies follow a number of strategies while they try to extend the term of patent protection. The strategies involve the skilled addition of patent so that the generic manufacturer maintain restraint for the patent which is about to expire.

The companies try to choke out competition and maximize their revenue through ever-greening in the pretext of lifecycle management of patent.

Evergreening  strategies that are usually followed by the companies are:

Once the patent loses the patent protection the product or the process falls into the public domain, and the firms producing generic products can use the invention without paying royalties to the inventor. The patent firms solved this problem by finding a loophole in the law by introducing trivial tweaks in the invention and then filling the new application with the patent office for that invention.

How to Overcome Ever-Greening of Patent Inventions?

For the inventor, it is essential to make his product immortal and on the other hand, some consumers have to pay high-cost value for the products patented. The process to make the patent long lasting is rampant in the pharmaceutical sector.

The amendment in the year 2005, became an instrumental tool to reject all the trivial tweaks made in the already published or known technology.

Must Read: What is "Patent of Addition"?

Legislations for Ever-Greening of the Patent

The patentability definition was also modified, and the patent law included section3(d); which helped in preventing ever-greening of the patent through a fresh patent application.

New use of the known substance is not covered under the purview of protection provided by the Indian Patent Act. Section 3(d) was inserted after the amendment in the year 2005 so as to conform with the Indian patent act with TRIPS.

The mere discovery of a new form...does not result in the enhancement of the known efficacy of that substance...unless such known process results in a new product or employs at least one new reactant.

Judicial Stance on Evergreening of Patent

The apex court has observed on the matter that the basic function of the patent law is to provide protection claim to inventions that are new and useful and any application that contains primary patent with minor changes to stop the clock, to be shown the boot.

Rejection of Novartis patent application by IPO was challenged before the supreme court of India. Following this landmark decision, patent applications dealing with new forms of known substances would also need to submit data pertaining to the enhanced therapeutic effectiveness of the compound for which they sought a patent.

The Indian Patent office rejected the grant of the patent based on the ground that the product termed as the invention was obvious, anticipated and hence was not permitted under section 3(d). The supreme court of India upheld the same decision.

Roche filed for patent protection of lung cancer drug Tarceva, the approval for the grant of the patent was obtained from the controller of the patent in the year 2005. In the year 2008, CIPLA came up with a generic drug which was similar but cheaper version of Tarceva.

The Supreme Court decision has set a precedent for the practice of 'ever-greening' of the patent in India. Legislation and the precedents have made sure that such methods will not be an easy task for all the companies and firms.