An Outlook on Compulsory Licensing for Patents

Compulsory Licensing of a Patent is done by the Government in a case where the person is not able to obtain patent license normally. A compulsory license allows the third party to use the product or process that is patented without the consent of the patent holder. 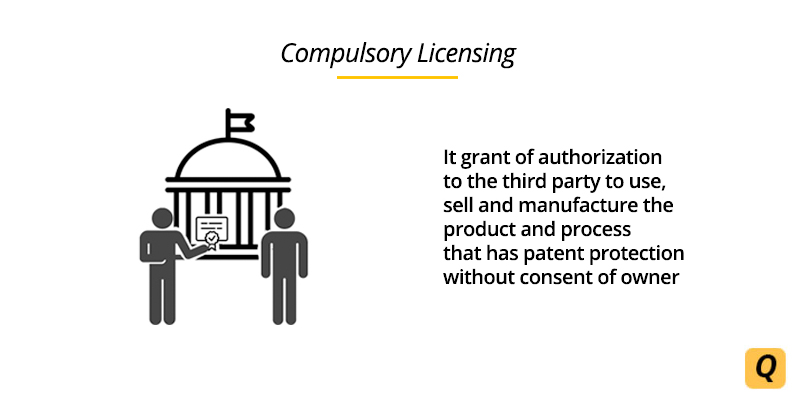 Patent protection is a type of intellectual property right granted by the Government to the inventor for the contribution made by him to the society by his innovation. The patent holder enjoys this monopoly right over the product or process. Through his patent, he can restrict other people from using his invention without prior consent.

However, the monopoly right granted is not absolute.

The Government has the authority to also grant a third party right over the patented invention, on the grounds that the grant of license in imperative to the welfare of the society. This type of patent grant is called Compulsory Licensing.

What is a Compulsory Licence?

Compulsory licensing involves the grant of authorization to the third party to use, sell and manufacture the product and process that has patent protection without the consent of the owner of the invention.

It can be defined as:

It's an involuntary contract between an unwilling party and a willing licensee that is enforced through the intervention of the law.

After the grant of a compulsory license, the third party has authority to manufacture patented product or process.

Must Read: Types of Patent Infringement: Litigation and Penalties in India

Compulsory license plays an essential part of 'socio-economic patents', such as health sensitive patents. It's used as an instrument to increase the availability of medicines and societal aids at affordable prices for all.

Compulsory licensing is covered under section 84 and 92 of the Indian Patents Act, 1970. They prescribe the grounds on which the third party can file an application for a Compulsory license with the patent office.

The TRIPS agreement hasn't given any specific grounds upon which Compulsory Licence (CL) can be provided. Determining the grounds for the grant of Compulsory was left up to all domestic laws.

It is a misconception among the manufacturers that compulsory license for a patent can be granted in a condition of an emergency only. The CL for the invention can only be granted after 3 years of the grant of the patent.

Section 84(1) of the Indian Patents Act,1970 lays down 3 grounds for compulsory licensing.

Also Read: An Outlook on Compulsory Licensing of Patent

1. The reasonable requirement of the public with respect to patented invention have not been satisfied

The invention should be readily available to the public based on the requirement and if the controller finds that the requirement is not met with he can grant a compulsory license for the same.

2. The invention is not available to the public at a reasonable or affordable price

Innovative drugs generally cost more than the generic drugs as they commonly include costs of R&D development as well. The term 'reasonable' has been explained as something that is beneficial for both the patentee as well as the user.

3. The invention that has received patent application has not been worked in the territory of India.

But if the manufacturer is able to provide justifiable grounds due to which the invention was imported or not made in the territory of India, the grant of a patent can be rejected.

Section 92 of the Indian Patents Act lays down special grounds based on which the government can grant a compulsory license for the invention that has patent protection.

The most common case of use of the patented invention is in patented drugs that are used in cases of health crises like HIV and AIDS that grip the nation's population.

More on: What is Patent Revocation in India?

Pros and Cons of Compulsory Licensing

Grant of monopoly right in the patent is a 'necessary evil' even though it is contradictory to human rights and the Indian Competition law. Grant of patent fosters innovation in the society and hence, patent protection is accepted as the necessary evil despite its conflict with other laws. Though compulsory licensing are known to be a compromise to the

TRIPS agreement was implemented to keep a check over the monopoly right that is granted through compulsory licensing.