How to Patent an Idea?

It is important to learn how to patent an idea so as to make sure that you own as well as use your intellectual property exclusively. 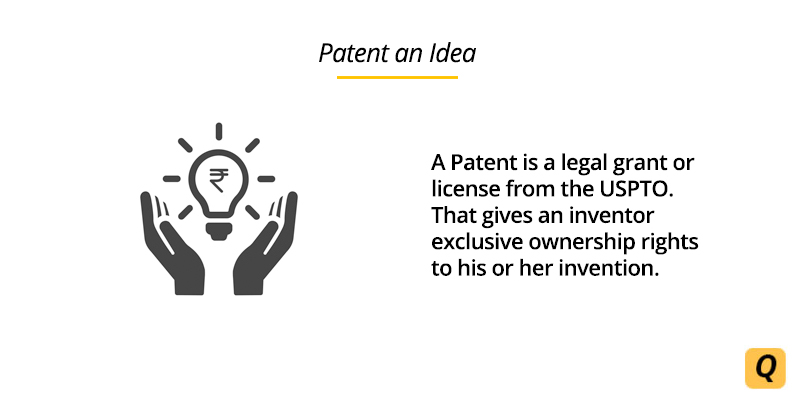 A patent is a broad-ranging form of intellectual property protection. It encloses protection not only for machines or products invented but also for certain process and ideas as well.

With the rapid innovation that we currently witness, the question of the patent protection process is raised in every sector of our economy. With the onset of 'modern-aged'  technological revolution, patents are the most sought-after intellectual property protection for inventors.

How to Obtain Patent for your Idea?

Learning how to patent an idea is an important step towards taking your idea or concept towards invention. The inventor must follow the following steps to protect their ingenious idea:

Step 1: Determine the eligibility of your idea for Patent protection

A patent is considered both a sword and shield for an inventor. A grant of patent helps the inventor or the owner of the invention to reap the benefits of their hard work.

Unlike trademark and copyright, for a patent registration, the invention needs to be 'useful'.

The Indian Patents Act, 1970, has prescribed what inventions do not receive patent protection under Section 3.

Any invention that just constitutes software or business method and does not include anything that is technical in nature is not patentable under Indian Patents Act.

Software per se are not patentable, but if the technical applicability of the software is claimed along with a hardware, a patent can be obtained for the invention.

The medical method by themselves are not patentable, but surgical pieces of equipment and products, such as medicines and vaccines can obtain patent along with the method involved.

Since medical process and method involve interference with the human and animal life special precautions are required, and hence Indian patent act has excluded a medical method from patent protection.

Inventions which are considered contrary to the public order or morality are not granted patent protection. The Indian Patents Office regularly cites morality as a ground for rejection when they examine the patent application.

According to the Indian Patents Act, an invention will not be considered patentable if:

Most rejection is faced by sexual simulation aids and methods.

Example: Recent patent application for a sexual toy by a Canadian company 'Standard Innovation Corporation' was rejected by the Indian Patent Office on the grounds of morality stating that the claimed subject matter relates to sexual stimulation and hence is against the public order.

Step 2: Keep complete step-by-step progress of how you came up with the idea

Inventors are always recommended to keep a record on the progress they made on their idea. The journal of progress will eventually help the inventor in his creative process and also help in implementing or including any improvements before he can file a patent application.

Always include the date and time of the records made in that journal, this helps in the creative process.

Step 3: Adjudge your eligibility for filing the patent

A patent application can be filed only in the name of the actual inventor and the co-inventor.

The law also prescribes that other people (chart)

Ideas or inventions that have previously attained patent protection cannot be patented again for a different application. An invention needs to be novel for it to obtain a patent. This means that the invention should not be published anywhere around the world and neither should it be discussed in any of the forums.

Therefore, you should always conduct at least some preliminary searches for your idea. The inventor in such case can opt for conducting a simple search on the internet or a full-blown search conducted by a patent professional.

Step 5: Ascertain the type of Patent you need

The patent application in India and certain other countries can be filed in two steps:

Thus, you can take time and develop your idea further, or if you want to sell your idea to a company without worrying about them ripping you off, you could go for the provisional patent application.

The inventor has to file a complete specification with the patent office, and if he is unable to do so the patent application will be considered abandoned, and the invention falls into the public domain.

The inventor has to file a complete specification with the patent office within 12 months of provisional application.

A utility patent is obtained for inventions which have minor improvements or are made by using an improved method or material. But, India is one such country which does not offer protection for such inventions.

Design patent in India is registered under Designs Registration Act; it protects the feature of products such as shape, pattern or configuration of colours and lines.

The term of a design patent in India is for 15 years and can be renewed after 10 years of the date of application.

A plant patent is not available in India but since India has ratified the TRIPS agreement they inculcated Plant Variety Protection(PRV) that is known to protect the rights of plant breeder.

The criteria for protection under the Act is that the harvested material should be Novel, Uniform, Distinct and Stable.

The patent filing process can be done by completing two steps process; that is by filing.

The inventor must keep in mind that the provisional patent application is not valid after 12 months and the invention being patented then falls in the public domain.

The non-provisional application is also known as an Ordinary Application. As per the provisions of Indian Patents Act, a patent application is to be filed for only one invention or group of inventions if they are interlinked.

Non-Provisional Specification must include

Can you Obtain Patent for Idea?

An idea in itself cannot be patented in India; since not every idea can be converted into an invention. However, certain ideas are considered patent worthy by the patent office.

For instance, if the idea is 'enabling' and the level of information in the idea is such that the person skilled in the art is able to form the idea into an invention and practice it without performing any additional research or help.

What Idea can you Patent?

There has been no express mention in the patent law provisions that an idea can or cannot be patented. This ambiguity has not been cleared by the patent office.

Moreover; the patent office has not been able to set a clear precedence whether an idea can be patented or not.

The Indian Patent Act, 1970 prescribes the following  basic requirement in order to obtain a patent :

Section 10 of the Act further lays down the requirements for patentability:

Hence; based on the above guidelines if an idea has the capability of being performed practically and is novel and non-obvious can be patented.

Is 'Prototype' necessary to file a patent for an idea?

If you think that your idea meets all of the above requirement, contact an attorney immediately and file a patent application so that you can save a prior date for your application.