An Overview of Indian Patents Act

The Indian Patents Act was enacted in the year 1911, since then the Patents Act has undergone a number of changes. Now, the Indian Patent Act has been formed to conform with the Trade-Related Aspects of Industrial Property (TRIPS) agreement. These modifications were brought to change the application procedure and to make it more transparent. 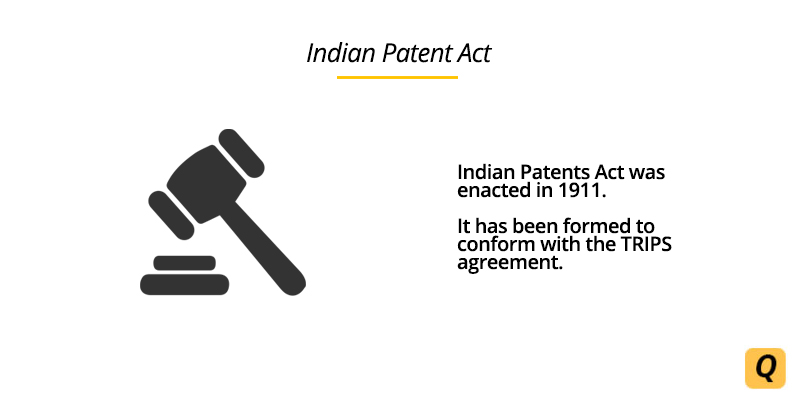 The increasing importance to protect intellectual property assets by both businesses and enterprises has led to an increased filing of IP applications with the IPIndia registry. According to the WIPO Statistics, 25,845 patents were filed in 2016 in India, compared to just about 10,529 in 2007.

The first Patent based law enforced in India was in the year, 1911. The current Patents Act came into existence after consolidation and amendment of various sections of the preceding Acts. The most recent amendment being in 2005. The Patents (Amendment) Act, 2005, introduced the concept of product patents for technology that might be used in the production of food or micro-organism.

The term patent has originated from the Latin word "Patere", which means "to lay open". This essentially means that patents are available for public inspection. Originally, patents were granted by Royal Decrees to any individual or business and the term used was Letters of Patent.

A patent is a proprietary right, which is granted to the inventor protecting his invention. Patent registration conveys to the owner, the exclusive rights over the claimed invention.

A patent has been defined in section 2 (1)(j) of the Patents Act as, "any new process or product that involves capable industrial application and inventive step".

The Government grants the patent right to the owner of the invention for the limited period of time. The rights granted by the government are called Monopoly Rights, and hence no other individual or company can use the invention or include the patented technology in the production of goods without prior permission.

Patentable and Non-Patentable Inventions as per Patents Act

As per the criteria set by the Indian Patents Act, an invention must be technical in nature and should satisfy the following requirements:

The invention must have the capability of being implemented in the industry. This means that the patent should have particular utility value.

If the patent is inventive in nature, it can attain patent protection. This means that the invention or process should not be known to the person who is skilled in that area or field.

Section 3 and section 4 of the Act (1970) are the basis on which criteria for non-patentability of a patent is decided. The criteria for patent registration is an invention that:

The invention which cannot receive patent protection are as follows:

The term of Patent in India

According to Section 53, the term of a patent in India is for a period of 20 years from the date of patent application. The date on which the patent becomes valid is mentioned and defined in section 45 of the Act. Section 45 states that every patent shall be dated according to the date on which the application for patent is filed and as per the instructions mentioned in the Patents Act.

The exclusive grant of the right given by the Government for a period of 20 years is a type of agreement between the patentee and GoI. Additionally, the Government has the responsibility to bring the invention to public knowledge after the expiry of the term.

Jurisdiction of Patent Granted in India

Jurisdiction of the issued patents is limited to the territory/country in which it is filed. The rights over a patent are for a period of 20 years, and the patentee can stop other inventors and manufacturers from using the invention and technology without any prior approval. However, the rights will be limited to that particular jurisdiction in which the application for the same was filed. For Instance, a patent that was applied through the National Phase Application will receive a patent grant protection only in the jurisdiction of the country in which it was filed.

Grant of Patent to Inventor

Once the patent is granted, the patent applicant can get a royalty from such inventions. Hence, a patent is considered an excellent base to secure a trademark registration for the name of the invention.

In India, there has been a long history of patent policy, which has been framed by policy experts after extensive study in the areas of intellectual property laws and culture. India has a different approach towards granting patents as compared to those industrialized countries. As per the Indian intellectual property laws, patents are viewed as a tool of public policy. Moreover, India has to conform itself to the TRIPS agreement.