Precautions To Take While Resigning As A Director.

A director can apply for his resignation by applying with a proper reason along with other legal documents and board resolution required with the filing of the prescribed forms to the ROC. 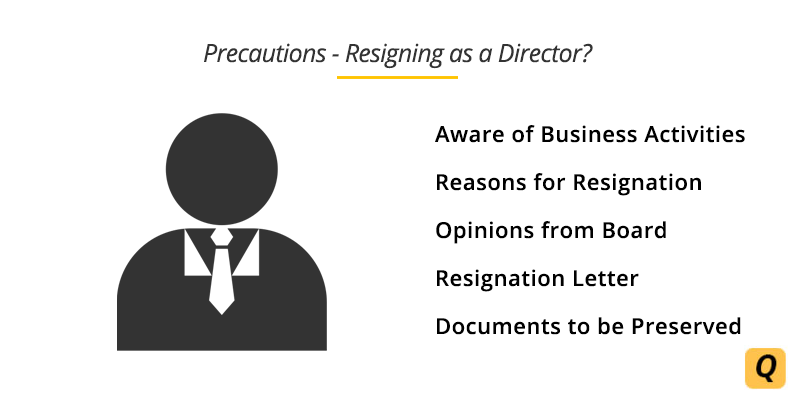 Precautions to take before applying for the resignation

By agreeing to become a director of a corporation, a person automatically accepts the duties and responsibilities related to that position. A director is looked upon as the officer in charge, as he’s the one who runs the company. If the director wishes to resign, then he must file for his resignations with the following precautions

What are the precautions taken while applying for the resignation?

Step -1: Applying for a resignation

Under Sec 168, of companies act a director may apply for his resignation by giving a notice in writing addressed to the Board of the Company stating proper and valid reasons for the same.

Once the board receives the application, they will intimate the registrar about the resignation with 30 days. They also need to share it in the report of the director in the next general meeting.

Note: A director can also apply directly to the registrar by filing form DIR-11 with prescribed fees within 30 days.

The director needs to keep track of the date of his resignation which may be the date when his resignation letter was received by the board or the date he mentioned in his letter. In such cases whichever is later is considered as the effective date.

Step - 4: Mode of sending the letter

The director needs to keep track of his resignation letter. Whether he sends it through speed post, courier, email or even hands it directly, he needs to make sure the letter is sent to the registered office only.

The resigning director can give MBP-1 within 30 days to intimate the Company of his concerns and interests by Section 184. It is not a mandatory procedure, but it can help the director acting as non-compliance on his part.

Form DIR-11 is an optional form, but it should be filed in cases

Step - 7: Documents to be preserved post-resignation