Removal of Director from the Company

A company is a separate legal entity that is entitled to remove the director from its board before the expiry of their term. As per new company law, the company can pass an ordinary resolution to remove a director if the process is not followed as per the requirement of the law then the removal can be declared void. 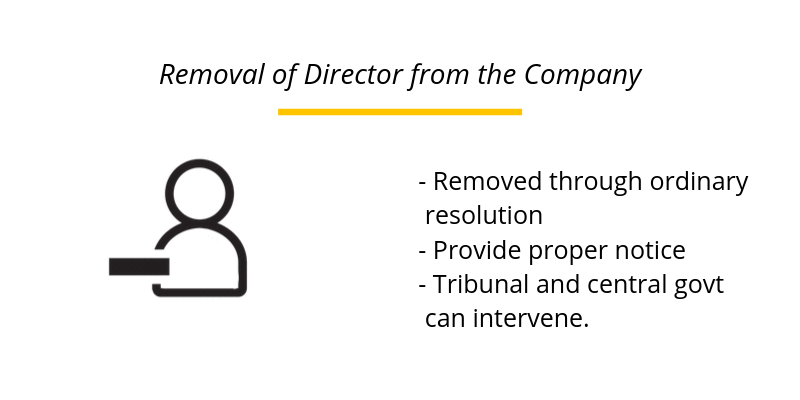 A director of a company can be removed by shareholders or by the central government by the power vested with them from companies act 2013. The director of the company before removal is given proper notice, and he too has right to be heard before disqualification or removal from the company board.

NOTE: The director has the power to challenge the removal in court if the process is not as per the provisions of companies act 2013 and hence, the removal can be declared void.

Who can Remove Director of a Company

Removal of directors can be done by the company, shareholders of the company and also by the tribunal or by the central government.

Legal Right of the Shareholder

In a company, directors are always answerable to shareholders and hence as per companies act shareholders have the legal right to remove a director through the Annual General Meeting (AGM).

Note: Shareholders of the company can not remove directors appointed by the tribunal.

The central government has the power to remove a person of managerial position in a company is recommended by National Company Law Tribunal (NCLT) once the case is referred to them by the govt in the following circumstances:

Modes of Removal of Director

A director in a company can be removed through the following ways:

Where directors remove himself from the Board/Resigns

If the director resigns within the terms of his contract then in that scenario it is essential to notify the Registrar of companies regarding the resignation through Form DIR-12 and  MGT-14 within 30 days of the resignation. Once the notice is sent to the Company registrar, the information will be assessed and once approved will be reflected in the register.

Procedure to be followed when the director removes himself from the board:

Step 1: A company board meeting will be held giving 7 days of notice. On the day board meeting is held the board can discuss whether to accept the resignation or to reject it.

Step 2: If the board accepts the resignation the director will pass a board resolution accepting it.

Step 3: Form DIR-11 and DIR-12 have to be filed by the director who has resigned along with the board resolution passed and with the copy of the resignation letter.

Once the forms are submitted with the ROC, they will examine the application and then remove the name of the director from the master data of the companies.

Where the director is removed suo-motto by the Board

The company act vests the right to remove the director by passing an ordinary resolution in the general meeting on the condition that the tribunal or central government did not appoint the concerned director.

Note: The resolution for the removal of the director will be an ordinary one unless the constitution provides otherwise.

In case where the director doesn't attend 3 board meeting in a row.

The director has not attended any board meeting in the last 12 months, or if he has missed 3 board meeting, then director then needs to vacate his seat as director.

Notifying the Change of Director/s

A notice to indicate a change of director is to be filed with the registrar of companies irrespective of the fact that the director ceased to hold the office due to resignation, removal, disqualification or death. Once the resolution is passed the companies need to file Form MGT-14 within 30 days of the passing of the resolution.

Consequences of not filing MGT-14 and DIR-12 are severe as the MCA charges penalty for not filing special resolution within 30 days of passing.

Note: Government can charge upto twenty-five lakh rupees as a penalty for not filing MGT--14 after passing of the resolution.

Where the Director is Disqualified

Procedure for Removal of Director

Note: Before the passing of the resolution the director being removed will be given an opportunity of being heard.

Reasons for Removal of Director from the Company

The removal of a director of a company can be for the following reasons :