How to Alter Object Clause in MOA? 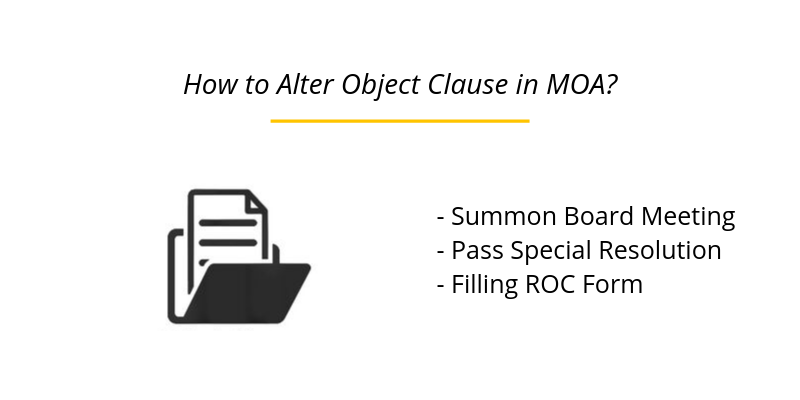 Memorandum of Association of a company defines its relation with the outside world along with the scope of activities. The main purpose of MOA is to provide fundamental conditions on which the company is incorporated under the current companies act.

Note: The content of memorandum of association mostly remain the same only slight variations are seen based on the nature of the company.

What is an Object Clause?

Object clause in companies MOA defines the business activity of the company. The main object is listed in the board resolution.

The objects clause for companies registered under companies act 2013 should classify follows:

Remember: The main object of the company must include not only the object they are dealing in but also the future object which the company might expand to.

Mostly the main object of the company is listed in the first paragraph of the object clause the rest are considered the only ancillary to the main object.

The following process is followed to change the object clause in MOA:

The first step in changing or altering the Object clause in MOA is to convene board meeting of the director for which a notice is to be issued by the chairman of the company and if there is no chairman then in that case either by a company secretary or by any director of the company.

The Board meeting should be initiated with the following in mind:

Once the Extraordinary general meeting is initiated on the time and place mentioned in the notice of the meeting; the special resolution for the change in the object of the company. For approving special changes in the EGM  a ballot should be conducted.

NOTE: The meeting should be convened within 7 days of the notice filed.

Following attachment are to be filed with MGT-14:

The registrar will then examine the form MGT-14 and register the changes in the object clause and issue fresh Certificate of incorporation.