How to Increase Authorized Capital of Company?

Authorised capital for a company can be appropriately increased through the passing of board resolution and filing Form SH-7 with Registrar of companies(ROC). Through authorised share capital the company can issue shares to its subscribers. 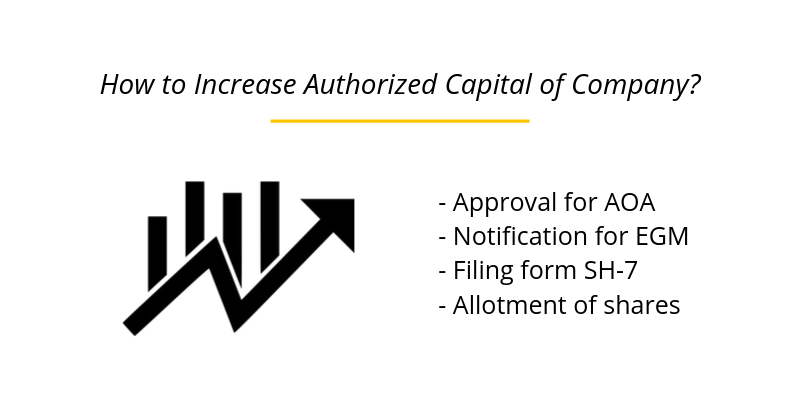 What is Authorised capital?

The Authorised Capital of the company is broadly divided into:

Issued capital is the value of the shares that have been issued.

Paid up capital of the company is the amount that is received by the company from the shareholders after distribution of the shares.

The amount that is not yet received by the company against shares that were issued to the shareholders or bought by them.

The Article of Association(AOA) of a company should have the provision for increasing the authorised share of the company, and if no such provision is present in the AOA, then it needs to be amended in accordance with the company law.

Note: Article of Association can be amended through the passing of the special resolution.

A board meeting is to be set up by the company to decide upon the date, time and place of Extraordinary general meeting. The notification for the same is to be sent to the shareholders, directors and creditors of the company.

Remember: The notice sent to the directors must include the method of voting that would be adopted while passing the resolution for increasing the authorised capital.

The EGM should be held at the time and place mentioned in the notification, and the increase in the authorised capital should be passed with ordinary resolution.

Pro Tip: The voting to pass the resolution is done in the manner mentioned in the notice filed.

Once the EGM is held the company secretary appointed has to file Form SH-7 with ROC within the prescribed limit of 30 days. The Company needs to submit the altered MOA and AOA  along with all the prescribed documents.

Documents to be Attached with Form SH-7

There is a requirement for the following documents:

To increase the authorised capital following fee has to be paid to the MCA:

Companies other than one person Company:

For Small and One Person Company

Reasons why a Company would Increase its Authorised Capital