Share Capital in a Company: Meaning, Types and Alteration

Share Capital is the money invested in any company and can be categorized into authorized, subscribed, paid-up, issued and called-up capital. A minimum of Rs. 1 Lakh of paid-up capital is required to initiate the business. 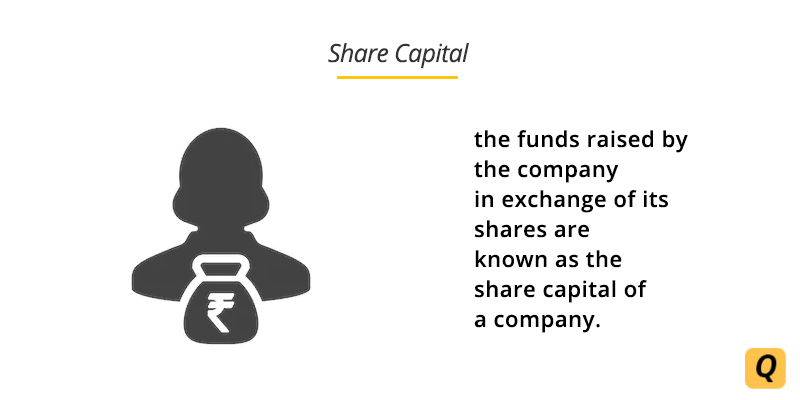 The funds raised by a company in exchange of its shares are known as the share capital of a company. It is a source of finance for the company and the amount of shares in a company can vary from one another.

In case, a company wishes to raise more money through the issue of its share then it can increase its Authorised Share Capital through a legal procedure from the Ministry of Corporate Affairs.

After careful examination of all the expenses and investments required in a company, the amount is mentioned in its Memorandum of Association under the Capital Clause. Usually, the promoters of the Company take care of the investment activities and decide the amount to be invested in the company after its incorporation.

There are different types of share capital through which a company can raise its funds to carry on the business operations. It includes –

The capital generated by a company through the sale of its shares is known as the Authorised Share Capital. It is the total amount which a company is authorised to raise from its investors through shares.

The amount of shares issued to the shareholders by the company is called issued or outstanding shares and it can never exceed the total amount of Authorise Share Capital of the company.

In simple words, the amount of shares issued cannot be more than the Authorise Share Capital in a Company. It is also known as Registered Capital since it represents the total amount with which the company is registered.

Paid-up Share Capital is the total amount paid by the shareholders for the shares held by them. The shareholders need to pay the amount of shares they have purchased within a specific period of time.

If the total money for the shares is not received from the shareholders then it falls under calls-in-arrears. For example –

The company is supposed to receive Rs 2 Lakh from its shareholders for the shares held by them however; they receive only Rs. 1,50,000. In this case, the remaining balance of Rs. 50,000 is the calls-in-arrears.

Note: Called and Paid-Up Capital will be same if the shareholders deposit all the money for their shares.

The part of capital which is asked for payment of the shares is known to be called-up capital.  For example –

If Rs 50 per share (originally Rs. 100) is called by the company for its 10,000 shares then the called-up share capital will be Rs. 5 Lakh. The partial money left is the un-called share capital.

Note: The shareholders are bound to pay the money for the shares held by them whenever it’s called for.

A Company issue shares for a certain amount to the general public. It is not necessary to issue the entire capital at the same time and the part of it which is not issued is known as Unissued Capital. Issued Share Capital is the amount of capital offered to the public for the issue of shares.

In simple words, it reflects the amount of authorized capital which is issued by the Company for the allotment of shares.

The amount of subscription received depends largely on the goodwill of the company. There are chances that the company might receive more application than the shares actually offered.

After the Companies Act amendment in 2015, now, there is no minimum share capital that is required to initiate a business. The applicant can decide by themselves after examining all the expenses and investments of the company. Usually all the companies registered under Ministry of Corporate Affairs (MCA) are incorporated with a share capital.

However; Companies Limited by Guarantee are incorporated without a Share Capital. Such companies have members as guarantors on part of shareholders. The liability of such members is limited to the amount they have agreed to pay in case of winding-up of the company.

The liability of the member is also towards the –

The profits earned by such companies are re-invested for promotion and business expansion. Such company raises funds through the amount of guarantee brought in by the members in the company.

Stamp Duty is a legal tax paid on certain filings to ensure the authentication of documents and information attached with it. The Share Capital of a Company and Stamp Duty are related to each other.

Every Company needs to pay a stamp duty while incorporating their business. The stamp duty of each state differs from each other and depends on the amount of authorized share capital of a company.

For example – If the authorized share capital of a Company is Rs.1 Lakh with 20 members and is to run the business in Chhattisgarh then the stamp duty to be paid is Rs. 1510.

It is mandatory to pay the stamp duty of the respective state during the incorporation of a company.  You can also calculate the amount that you need to pay on the Ministry of Corporate Affairs.

There are two ways to check the Share Capital of a Company. You can either visit the Ministry of Corporate Affairs (MCA) online portal to check the Master Data of any company including all of its share capital.

Quick Company, a legal registration company for the first time has brought all the Company Data at one place. You can check information like Company Directors, Timeline (updated events of every company), Documents, Financials and Capital Involved.

The benefit is real-time updated data without the need of any Corporate Identity Number (CIN). You just need to enter the name of the company you wish to search the data for.

Yes, the authorized capital can be increased after seeking permission from all the members, directors and shareholders of a company. A special General Meeting is called where the amount to be increased is decided.

The increase of Capital will help the company to –

A company can increase its Authorize Share Capital by filing an application (SH-7) on the Ministry of Corporate Affairs (MCA) along with the prescribed fee and required documents. You might also require attaching form MGT-14 along with the application with respect to the resolution passed for changing the capital structure.

Once you make the payment, a confirmation e-mail will be sent to the registered e-mail of the applicant confirming the successful submission of the application.

The application for increase in the capital needs to be filed within 30 days of conducting the General Meeting. If a company is unable to file the form within 30 days then, an additional fee in the form of penalty is also applied according to the time period of delay.

If the shares are transferred/ sold after 12 months of its purchase then, the seller can make a long-term capital gain while, if they are sold within 12 months then the gain is short-term.

As per the Financial Budget, 2018, if the seller makes a capital gain of more than Rs. 1 Lakh on the sale/transfer of equity shares then 10% tax is paid by the owner.

It can also be explained as the Cancellation of Uncalled Capital of the Company after which the number of shares in the company will decrease.  In some cases, the shareholders may receive cash for the amount of shares cancelled.

The terms and conditions for approval of capital reduction will be mentioned in RSC-6 and the same will be issued by the Registrar of Companies on RSC-7.