A shareholder is any person or company that has the ownership of a minimum of one share of the company. Shareholders also enjoy the profits earned by the company’s success. As per Companies Act, 2013 shareholders enjoy certain rights as follows:- 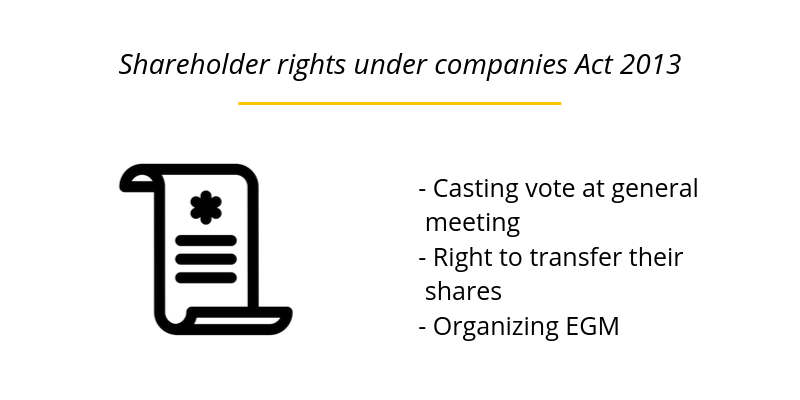 1. Amendment of AOA or MOA

It is mandatory for a company to hold an annual general meeting and also issuing prior notices for the meeting. These notices can be delivered either in writing or through digital means.

The shareholders also hold the right to cast votes at such meetings whenever motions are passed at such meetings. The time gap between such annual general meetings should not be more than 15 months.

Shareholders of a company also hold the right to transfer their shares but this right does not include shares that have incomplete payment or the authentication of the transferee is not permitted by the board.

However a private company could limit its transfer of shares through its article of association. Through AOA it can give certain preventive rights to its members to curtail the purchasing of such shares which the transferee recommends to transfer.

An extraordinary general meeting can be convened by the board of directors of the company if the demand for the same is made by the shareholders. This request for the meeting can only be made by shareholders holding at least 10% of remunerated capital.

If a situation of unprofessional conduct or repression arises in the company the minority shareholders can exercise their right to safeguard themselves against such acts.

They can report the matter to the company law board and if found guilty the board can act against them accordingly.

There is a separate dividend account in case of unpaid dividends. The payment of dividends for any fiscal year is made by the company out of the profits of that year.