Buyback of Shares by a Company

Buy back or repurchase of shares is a tool that enables the Companies to purchase its shares currently held by all its shareholders. There are a number of reasons companies buy back its shares, the main intention of the company to buy back shares is to reduce the number of shares in the open market. In fact, buy back of shares is an important method of capital restructuring. 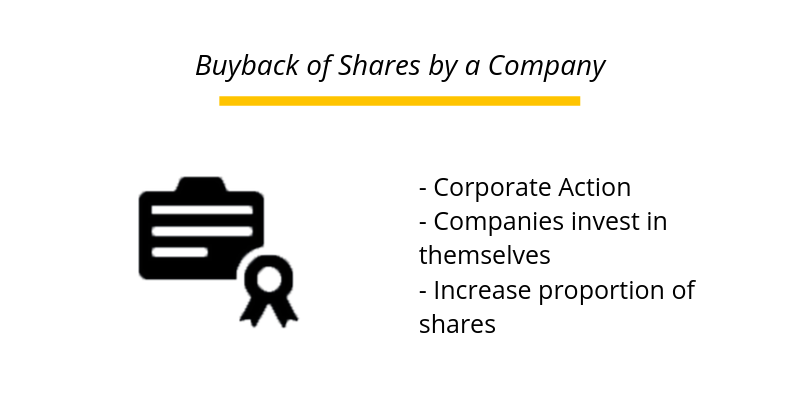 The buying back of shares not only improves the shareholder value but also helps the company to use its funds in a better way.  The company utilizes its surplus fund to cancel a portion of its scares by purchasing either from the open market or by direct purchase from the shareholders.

In most of the cases, the company opts for the repurchase of its shares when the market value of such shares falls below the face value/book value.

The shares of the company are purchased for the reasons noted below:

The relevant sections of the aforesaid Acts, Rules and Regulations have described certain conditions, prohibition and relaxation for the repurchase of shares of the company. Such details are consolidated and are described as below:

The step by step process of buying back of shares is described as below:

Means for buy back its own shares

The company can buy back its shares in any of the following manners:

Important Points to remember for the purchase of its own shares

An additional 10% tax was introduced in the 2016-17 Union Budget to those who earn more than 10 lakhs of annual dividend income over and above the 15% Dividend Distribution Tax paid by companies.

As per the Income tax Act, repurchasing of shares shall not be seen as dividend if it is in accordance with the provisions of the Companies Act.  Consequently, the amount paid by the company to its shareholders in buyback would not attract dividend distribution tax.

The gains on buyback would be generally regarded as capital gains in the hands of the shareholders. In short, the buyback rewards its shareholders. In the other hand, buybacks are subject to securities transaction tax (STT) in which the tax is exempted for long term capital gains on transfer of shares which held for more than a year and thus the company does not pay any tax on such buyback of shares. This has led to a surge in companies announcing buyback offers.

To take advantage of this, several companies resorted to the buyback of shares instead of distributing dividends. In view to fix this loop hole of garbing the buyback advantage, the new provisions in income tax law has been proposed.

The minority share holders will not have any tax implication, but the promoter shareholders or any shareholders having equity dividend of more than 10 lakhs would be the beneficiary of the prevailing rules in Income Tax Act.