Features of a Joint Stock Company

The key characteristic of a Joint stock company is that the ownership of the company is divided into shares, held by the shareholders. 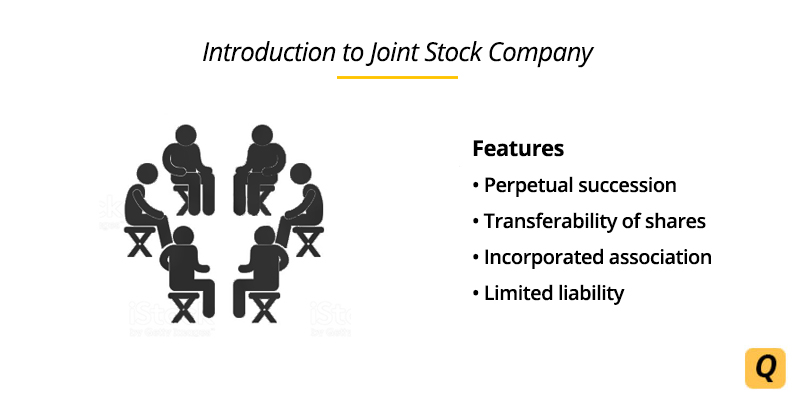 The law gives a company the legal status of a separate legal entity, that is, an artificial legal person. Similar to a natural person, a company has the right to buy/sell/own property in its own name, enter into contracts and agreements and also lend/borrow money. Further, a company can also be sued and initiate a legal proceeding under its name. The board of directors are the ‘management’ of the company and act on the company’s behalf by way of resolutions. Since the company has no physical existence and only exists in the eyes of the law, certain laws cannot be applied to companies. Thus, the company is called an ‘artificial’ person.

Since the company is recognised as an artificial person in the eyes of the law, it also has a separate identity that is different from the owners and members of the company. This is a contrast to the partnership and proprietorship business models, where the legal identity of the business and owner are one and the same. When a joint stock company come into existence, though the incorporation process as mentioned in the companies act, the company has its own distinct identity. This means the company can have its own PAN card, etc. Therefore, the company is responsible for its own actions and does not have to depend on its members to conduct business in its name.

More on: Importance of PAN Card for Companies

For a company to be recognised as a joint stock company and be recognised as having a separate legal entity, it must be registered and incorporated under the provisions of the Companies Act. This is a mandatory exercise, and without an incorporation certificate, the company cannot come into existence.

A joint stock company has a separate legal identity, and therefore not dependent on its members or board of directors for its survival. The lifespan of the company is in no way related to its shareholders or members, and can only end by the provisions of the law – liquidation, and dissolution of a company. The change in management/shareholding patterns will not affect the legal character of the company.

Limited liability of the owners/members of a business is a key difference that distinguishes a joint stock company from a sole proprietorship or partnership models. Limited liability means that the members of the company cannot be held responsible for the debts of the company and vice-versa. So, in an event of loss, the personal assets of the members cannot be liquidated to meet the company’s debts. Only the assets held by a company can be used to pay off the debts of the company. In such an event, the liability of the shareholders would only extend to the amount of their unpaid share capital, and in case the shares are fully paid-up, they are not liable to pay anything more.

Under the 2015 amendments of the Companies Act, the use of the common seal has been made optional. Earlier, the common seal was mandatory and was adopted in the first meeting of the company after its incorporation.

More on: What is Joint Stock Company?

The ownership in a joint stock company is divided into various stocks, which care called shares of the company. These shares can be transferred, bought or sold, and would result in the transfer of ownership as well. In a public limited or listed company, these shares can be freely transferred. The shares are listed in a national stock exchange, from where they can be bought and sold. The price of the shares fluctuates based on certain market factors. Even in a private company, the shares can be transferred from one person to another; however, there are certain restrictions. Unlike a listed company, the stocks cannot be freely traded.