An Introduction to Companies Under the Indian Company Law

Under the provisions of the Companies Act, 2013, a company in India has several unique features, which make a significant difference to the ease of doing business in India. 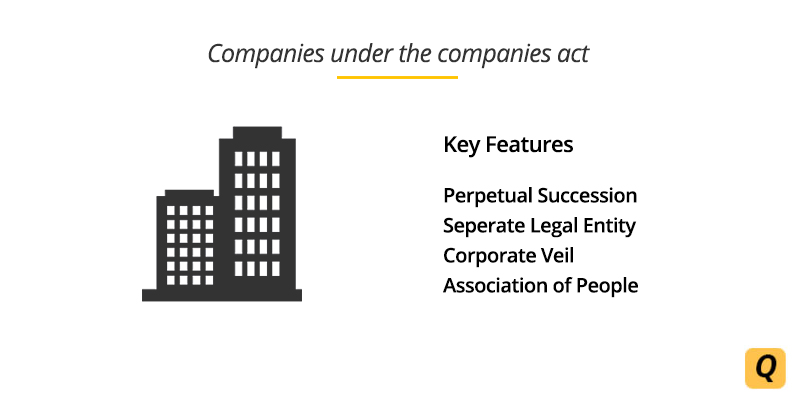 Test A company is typically an association of individuals who have come together to meet a common objective and purpose. These people contribute money and create a distinct legal entity to carry out the activities that meet a pre-defined goal.

Purpose of the Companies Act

The Companies Act, 2013 governs all companies in India and defines the functioning, roles, statutory duties and responsibilities of a company, its members and other associated people.

The basic objectives of the Companies Act.

Features of a Company under the Companies Act

Since the company is a distinct legal entity, it can be seen as an artificial person having the ability to act and be treated as individuals. For instance, a company can sue, and be sued. It can enter into contracts and agreements, hold property, and borrow loans. Here are a few unique and defining characteristics of companies in India defined by the Companies Act, 2013.

Once a company is incorporated and receives its Certification of Incorporation, it’s seen as a separate person in the eyes of the law. It is treated as an artificial person. The company is distinct from its members, founders, directors, and employees. This means that the company can earn money, buy property, enter into agreements and at the same time incur debts. Despite the fact that the company has a separate legal identity, it cannot have a status of a Citizen of India, as under the Indian Constitution.

Since the company has a distinct identity, it also means that the company is not dependent on its members or directors for its survival. As the company is being managed as per the norms of the Companies Act, it will continue to exist and its legal status cannot be questioned. The company cannot cease to exist unless it is struck-off by the books by the Registrar of Companies or wound-up voluntarily or under the Insolvency and Bankruptcy Code.

Just like the company's' liabilities are its own, any property held by the company is its own, and the members and directors cannot claim ownership over such properties.

The contribution of the members of the company is entitled in shares. These shares can be transferred from one person to the other by way of monetary compensation. While the shares of a public company can be traded freely, there are certain restrictions on the transfer of shares of private companies.

The corporate veil refers to the separation of the company from its members and board of directors.

This basically protects the individual from the debts, liabilities, errors and other obligations of the company, and vice versa. However, this protection is not ironclad.

The corporate veil can be pierced if the Court finds evidence that the company is not functioning under the provisions of the Companies Act, holding the members or directors liable for the corporate wrongdoing.

Under the Companies Act, an association of more than 50 people, with an objective of carrying out a business for profit, is an illegal association under Section 464.

For instance, a partnership firm of more than 20 partners will be considered an illegal association of people unless registered under the Companies Act or any other recognised legislation.

Since there is no corporate veil for illegal associations, the members are entirely liable for any debts and obligations of the company.

Under the Companies Act, there are different types of companies that can be incorporated. Here is a brief overview:

The stocks of private companies are held by a closely knit group of people, while the stocks of a public company can be held by any member of the public.

Limited and unlimited company differ when it comes to the liability of the owners or shareholders of the company.

When more than 51% of a company is owned by another company, it creates a relationship between a holding and subsidiary company.

These companies are a type of Non-Profit Organisation. Such companies are incorporated with the goal of promoting art, science, religion, commerce or with charitable and philanthropic intentions.

These are those companies that have established a business in India but have been incorporated outside India.