Can a Subsidiary own shares in a Parent Company? 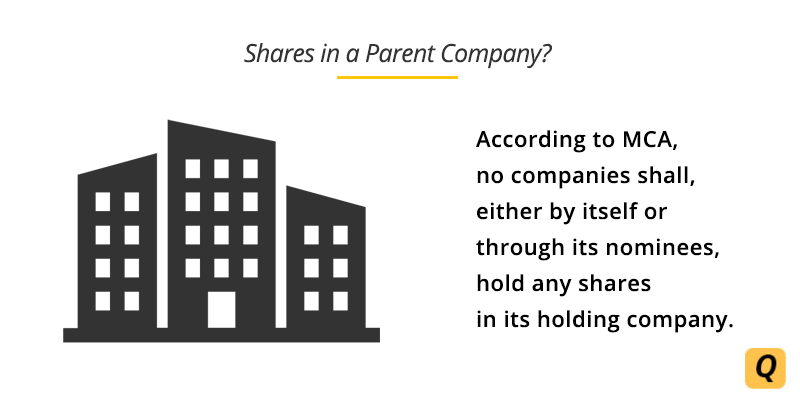 Anyhow, in some cases subsidiary is allowed to hold shares of a parent company where the subsidiary acts as a legal representative of a deceased member of the holding company, or it has been appointed as a trustee

What is a Subsidiary?

A subsidiary is a separate legal entity established under the Act. Hence, it can acquire, buy, and alienate, property in its name and remains unaffected by the death or removal of any of its member

A subsidiary is allowed to have 100% Foreign Direct Investment (FDI) in many of the sectors through Company type business entity without taking any prior Government approval.

What is the difference between a holding company and subsidiary?

A company is a legal entity formed by an association of persons to carry on a commercial or an industrial Enterprise. It denotes a joint-stock enterprise, where a large number of people contributes to the capital. On the basis of control, companies can be divided into two parts

A Holding Company is just like a Parent Company that holds a majority interest in several companies. A company owning one or more than one company as its sister company and holds more than 50% of its shares is known as a parent or holding company. A holding company has the power:

Subsidiaries are controlled either partly or wholly by another company which can be a parent company or a holding company. According to sec 2(88)(i) a company in which the holding company controls the formation of the Board of Directors is called subsidiary.

Can a subsidiary hold shares in a holding company?

However, in certain cases subsidiary can be a member of its holding Company:-

According to Ministry of Corporate Affairs “The subsidiary company referred to in the preceding proviso shall have a right to vote at a meeting of the holding company only in respect of the shares held by it as a legal representative or as a trustee, as referred to in clause (a) or clause (b) of the said proviso.”