Authorized Capital vs Paid up Capital 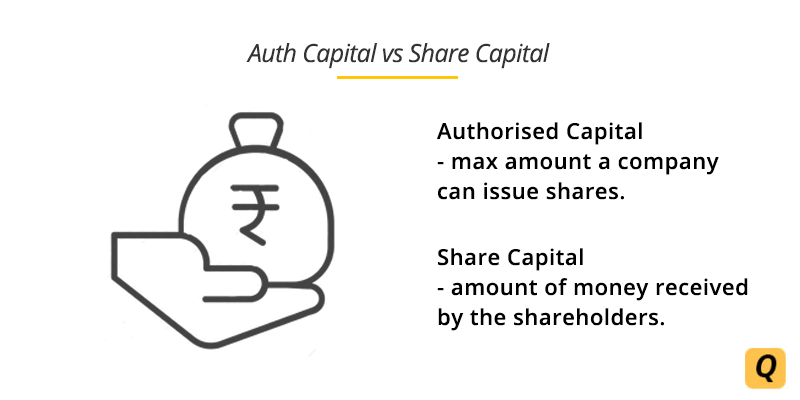 All the funds raised in a company through the issue of shares forms a part of the Share Capital.  A Company needs to decide its Share Capital well in advance (before its incorporation) considering all the expenses and investments.

The amount of Share Capital is mentioned in the Memorandum of Association of a Company under the Capital Clause. There are different types of share capital of a company like Authorise Capital, Paid-Up Capital, Called-up Capital, Subscribe Capital and Issued Capital.

A Private Limited Company after its Incorporation decides the amount of Authorize Capital for the company and the value of shares they will receive during the allotment of shares to its shareholders.

It is the maximum amount of share that a company is authorized to issue to the shareholders. It is not necessary to issue the whole amount of the authorized capital, part of it can remain unissued.

The amount of share that is issued to the shareholder is called the issued share capital of the company. To put in other words, an authorized capital is the one which is the maximum amount of value of shares that a company can legally issue to the shareholders.

Can Authorized Capital be Increased?

You can also increase the Authorize Capital of your Company by seeking approval from all the members, directors and auditors. The amount to be increased is decided in the General Meeting and an ordinary resolution is passed for the same.

The Company needs to file form SH-7 within 30 days of passing the resolution on the Ministry of Corporate Affairs (MCA) online portal.

This capital is a reflection of how an equity funding is needed for a company to grow in the market. A company can raise its finances with the help of the paid-up capital, which can either be in the form of Initial Public Offering(IPO) or an additional issue.

According to the latest amendment (2015) in the Companies Act, 2013, the Government has removed the requirement of minimum paid-up capital which was earlier required for the incorporation of Private (Rs 1 Lakh) and Public Limited Company (Rs 5 Lakh). Now, the applicants can choose the amount of capital on their own.