TRIPS Agreement and Patents in India

Since the introduction of the TRIPS Agreement, India has been a member of the WTO and has considered completing the agreement's clauses in its domestic patent law. The Patents Act 1970 was amended to introduce a 'mailbox' facility and exclusive marketing rights. 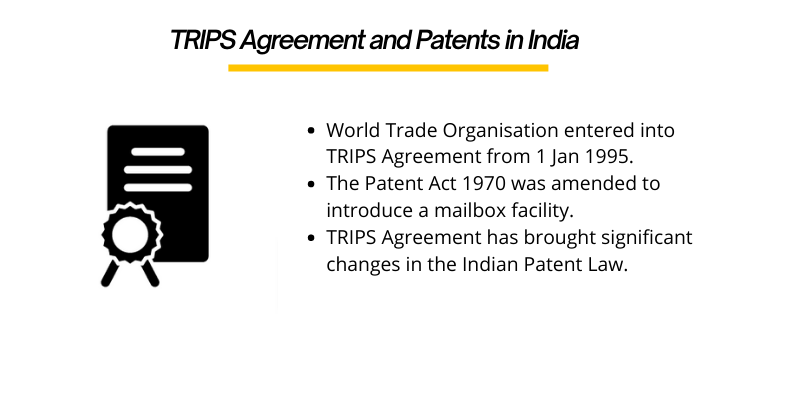 What is a TRIPS Agreement?

The World Trade Organization entered into an agreement on Trade-Related Aspects of Intellectual Property Rights in effect from January 01st, 1995. Since the TRIPS Agreement came into existence, it has brought several significant changes in the Indian patent law. The agreement provides reasonable standards and norms for using and enforcing trade-related intellectual property rights.

How was the Indian Patent Law affected by the TRIPS agreement?

The adoption of the TRIPS to the Indian Patent law was not smooth; instead, it faced certain issues, among which two significant issues caused the reason for the amendment to the Patents Act 1970. These were -

India tried to bring into effect an ordinance to comply with the mailbox facility. Also, for the protection of exclusive marketing rights. However, it was rejected by the Parliament because it did not fulfill the requisites.

How were the Patents (Amendment) Act 1999 introduced?

In the case of the United States vs. India (DS50), the United States raised a grievance against India before the World Dispute Settlement Body that India had ceased to implement a mailbox facility and EMRs into its patent law. This means India has failed to comply with Articles 70.8 and 70.9 of the TRIPS Agreement.

The Panel established that India violated its obligations under Articles 70.8(a) or Article 63(1) of the TRIPS Agreement. It had not established the manner of allowing a product patent for pharmaceutical and chemical inventions to protect novelty and priority and did not provide any means for the grant of EMRs.

India thereafter filed an appeal before the appellant body of WTO against the decision. The Appellate Body ratified the main conclusions of the Panel, believing that India’s filing system for patents was incompatible with the above-said Articles.
India, as a result, amended its patent filing system in compliance with the said article, resulting in the Patents (Amendment) Act, 1999, with consent from the Parliament.