What are Minutes of Meeting?

These are the official recordings of all the things discussed or resolutions passed in a Board or General Meeting of a Company. It is mandatory for all the registered companies in India to maintain the record in a Minutes Book. 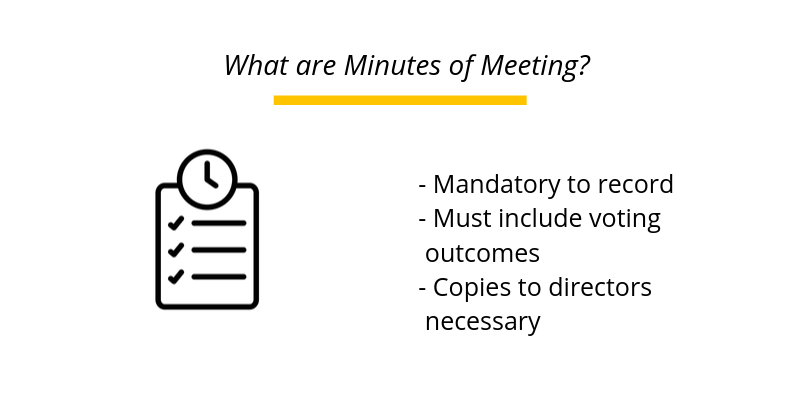 Minutes, in general, had been derived from a Latin word which meant small notes. The minutes of a meeting act as legal proof and should be drafted in a clear and correct way. All the Companies registered in India have to maintain a record of all the minutes of the meeting conducted in every financial year.

They also act as a reference for the company and are assumed to be correct if drafted as per the provisions of the Companies Act, 2013. Minutes of the Meeting generally contains information like names of the people involved, decisions made (if any), agenda of conducting the meeting, actions to be taken and next date of the meeting.

The minutes of the meeting are generally noted by a member of the company (i.e. Managing Director, Company Secretary, any other director or officer) while participating in the meeting which later is written in the format of a formal report.

Some of the other reasons include the presence of a quorum or not, corrections or amendments to the minutes of previously held meetings and steps to be taken after the meeting.

The drafted minutes of the meeting is to be sent to all the directors of the concerned company asking for their comments within 15 days of the meeting conducted. The minutes can be circulated in any electronic form or through speed post/courier.

The Directors of the Company will comment on the draft of the minutes created by the Company Secretary within 7 days from the date of circulation of the minutes. In case, no reply is received from any of the directors; then it will be assumed to have been accepted from the respective director.

If any director fails to reply to the minutes of the meeting within 7 days, only the chairman will decide whether to consider the comments or not.

Note: The minutes should be entered in the Meeting Book within 30 days of the meeting conducted.