Insolvency and Bankruptcy Code in India

The code protects the interest of small entrepreneurs as well as provides a process to tackle the Non-Performing Assets (NPA). Bankruptcy code in India was formed in the year 2016, to consolidate the existing framework and to create a single law for insolvency and bankruptcy. 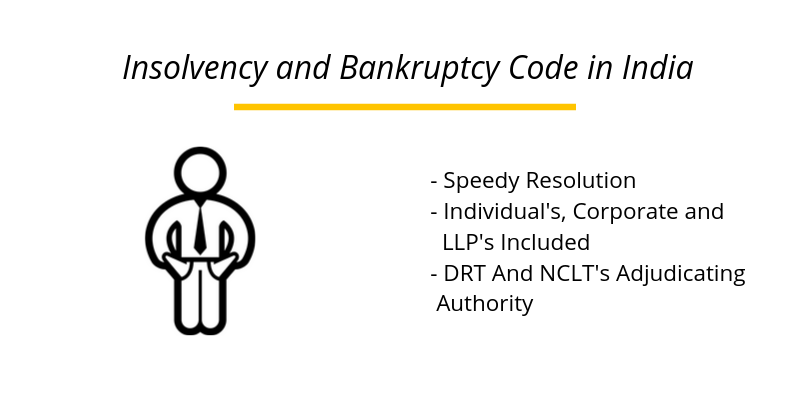 India’s NPA ratio was more than any upcoming markets, and the markets such as energy, infrastructure, construction and mining had taken hit due to such weaknesses in the market.

Hence a major structural change through enactment of Insolvency and Bankruptcy Code, 2016 was made in India. The current bankruptcy code as per the finance minister was meant to be an entrepreneur-friendly legal insolvency framework which was not available with all.

The code of 2016 applies to companies that deal in providing time-bound resolution to the insolvency process. Whenever default in payment occurs, creditors gain control over the debtor’s assets under such circumstances; the insolvency matter should be resolved within 180 days, which is extendable up to 270 days.

Since the enactment of the law, the Bankruptcy Code has undergone several amendments so as to create a time-bound process for insolvency resolutions by the companies or individuals.

Who Can Consolidate Insolvency Resolution?

The creditors have to report any kind of financial information they have on the debtor. Any such information provided by the creditors should include the record of the debt owed, liabilities and defaults.

National Company Law Tribunal (NCLT) will carry on the resolution proceeding for the companies, whereas Debt Recovery Tribunal (DRT) for individuals. Both the adjudicating authority will have a duty to initiate the resolution process, approve the final decision of the creditors and appoint an insolvency professional.

Insolvency and Bankruptcy Board

The IB Board will consist of a representative from the Ministry of Finance, Corporate Affairs and law and Reserve Bank of India.

Any proceeding for insolvency and bankruptcy can only be initiated if the debt for 1 lakh or more. If the debt is more than 1 lakh, the company creditors can initiate the proceedings with the NCLT. The entire process of insolvency can be completed in two stages:

During the Insolvency resolution process, the creditors weigh the option for the company resurrection. If the debtor company is not viable for continuing the business, the next stage of the process is initiated.

What is the Procedure to resolve insolvency for Companies and Limited Liability Companies?

Who can Initiate Insolvency Process?

Steps to resolve insolvency in India

The insolvency code proposes the following steps to resolve insolvency:

When a debtor is unable to pay back the loan, the insolvency process can be initiated either by the debtor or the creditor. The state of not paying back the debtors or creditors is known as insolvency, and an application is to be submitted to the national company law tribunal (NCLT) by the corporate debtor.

If the corporate debtor files for insolvency, the operational creditor has to send a notice of demand (10 days) prior to the initiation of resolution proceedings, the entire insolvency process is administered by the Insolvency professionals and is responsible for providing the financial information about the debtor assets to assets.

The process of insolvency lasts for 180 days, which can further be extended for 270 days and no legal action against the debtor can be initiated during this period. The creditors cannot launch any coercive proceedings against the corporate debtor in any other court or forum until the process is completed or the liquidation process has been initiated.

NCLT will have to appoint a committee of financial creditors who have lent money to the debtor. The creditor committee will then take the decision regarding the future of outstanding debt owed to them all.

If the decision is not taken within 180 days, the debtor's asset goes into liquidation.

Liquidation will only take place if the insolvency resolution process is unsuccessful or due to following reasons: