After the introduction of G.S.T, on May 11, 2016 the Rajya Sabha passed Insolvency and Bankruptcy Code, 2016’ which is considered to be the major economic reform Bill moved by the Government of India. The Bill received Presidential assent on May 28, 2016 and was notified in the official gazette. 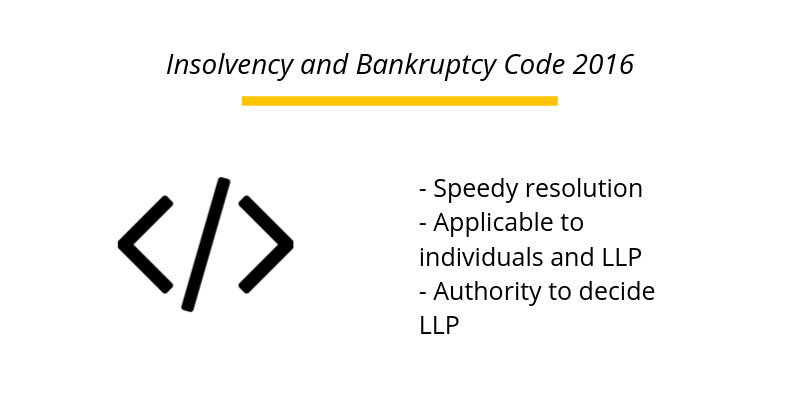 Earlier before the introduction of the bill, the lenders were unconfident with various overlapping laws in India with relation to the recovery or restructuring of the defaulted assets.

According to the Government, the outcome for the recovery action by creditors were not as desired through the Contract Act or through special laws such as the Recovery of Debts Due to Banks and Financial Institutions Act, 1993 and the Securitisation and Reconstruction of Financial Assets and Enforcement of Security Interest Act, 2002.

In addition, recovery actions through the Sick Industrial Companies (Special Provisions) Act, 1985 and the winding up provisions of the Companies Act, 1956 has not been in favour of lenders.

Also, the laws dealt with individual insolvencies such as Presidential Towns Insolvency Act, 1909 and the Provincial Insolvency Act. 1920 were outdated.

The Government observed that a critical improvement is required in the credit market regime and a reform in the laws related to insolvency and bankruptcy can only help to bring back the confidence of the creditors to invest in creditors market. The debt access of the borrowing class was critically down and resulted in the economic slowdown in India.

Moreover, the legal and institutional framework existed in India for the effective and timely recovery and restructuring of defaulted assets were not in line with global standards.

To revive the economy of India and to enhance the confidence of creditors, the Government has decided to give a face-lift to the laws relating to debt defaults.

The new law is aimed to consolidate and amend the laws relating to insolvency and restructuring of corporate, individuals and partnerships in a time bound manner.

The Government has the view that such consolidation would aid great clarity in debt default laws and would facilitate the application of consistent and coherent provisions to different stakeholders affected by business failure or inability to pay debt.

The main goal is to promote entrepreneurship, availability of credit, and balance the interests of all stakeholders for maximization of value of assets of such persons and matters connected therewith or incidental thereto.

In short, the law aims to consolidate the laws relating to insolvency of companies and limited liability, unlimited liability partnerships and individuals, presently contained in a number of legislations, into a single legislation.

The consolidations of laws relating to insolvency and bankruptcy have significant features and are discussed as under:-

The terms with related to the Insolvency and Bankruptcy code which require further explanations is discussed as below:

Adjudication authority would have exclusive jurisdiction to deal with insolvency related matters, no injunction shall be granted by any court, tribunal or authority in respect of any action taken, or to be taken, in pursuance of any power conferred on the NCLT/ DRT.

Insolvency Information Utilities: As per the provisions of the new code, an individual insolvency database is suggested to collect, collate, authenticate and disseminate financial information from listed companies as well as financial and operational creditors of companies. This action is expected to provide information on the insolvency status of individuals.

Moratorium: During the creditor action is stayed, the Adjudicating Authority on the recommendation of the Resolution Professional can grant Moratorium.

Liquidation:  Based on the vote of the majority of the creditors, on failure of the submission of resolution plan within the prescribed period, the liquidation process is initiated.

The following debts will be paid in priority given below:

As per the provision of the code, the Government of India can enter into agreements with any country outside India for enforcing provisions of the Code and notify applicability of the same from time to time.

Further, assets of the debtor located outside India may also be included for the purpose of the insolvency resolution process and/or liquidation before the Adjudicating Authority.

The process begins with the filing of the insolvency application, the details with respect to such insolvency or bankruptcy should be mentioned there in.

The application with the Adjudicating Authority is carefully examined considering all the aspects of the defaulted debts, The Authority then admits or rejects such application upon completion of the scrutiny.

A moratorium is declared upon admission of the application by the Authority.

The Second phase of the insolvency involves the appointment of the interim Insolvency Resolution Professional.

A public announcement is made with regard to the insolvency of the company.

The Resolution Professional prepares information memorandum and a detailed Resolution Plan is prepared.

The same is submitted to the committee of creditors for examination and upon approval it is submitted with the Adjudicating Autority. On careful evaluation of the same,

The Plan can either be admitted or rejected. If rejected the Liquidation process of the business entity is initiated. If approved, the Moratorium ceases to have effect.

Generally, the Insolvency process will take more than 180 days to complete.

Provisions of the Code

The provisions of this Code shall be applicable to:

The vision of the new law is to encourage entrepreneurship and innovation. Some business ventures will always fail, but they will be handled rapidly and swiftly.

Entrepreneurs and lenders will be able to move on, instead of being bogged down with decisions taken in the past.